First American Financial Corp (NYSE:FAF) investors should be aware of an increase in hedge fund sentiment recently. FAF was in 33 hedge funds’ portfolios at the end of the third quarter of 2018. There were 26 hedge funds in our database with FAF holdings at the end of the previous quarter. Our calculations also showed that faf isn’t among the 30 most popular stocks among hedge funds.

In the 21st century investor’s toolkit there are many tools stock market investors have at their disposal to value publicly traded companies. Some of the less utilized tools are hedge fund and insider trading sentiment. We have shown that, historically, those who follow the best picks of the best investment managers can beat the broader indices by a significant margin (see the details here).

At Q3’s end, a total of 33 of the hedge funds tracked by Insider Monkey were long this stock, a change of 27% from one quarter earlier. By comparison, 27 hedge funds held shares or bullish call options in FAF heading into this year. With the smart money’s positions undergoing their usual ebb and flow, there exists a few noteworthy hedge fund managers who were boosting their holdings meaningfully (or already accumulated large positions). 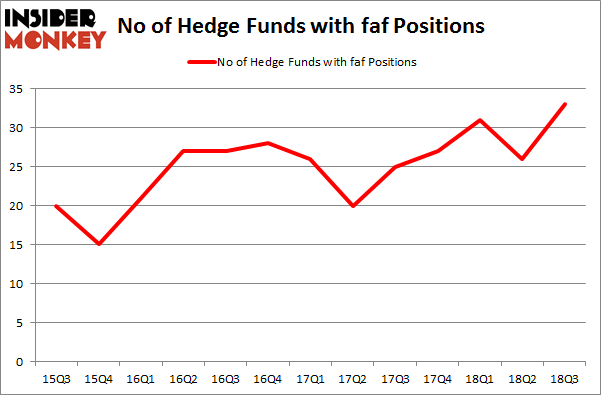 When looking at the institutional investors followed by Insider Monkey, John W. Rogers’s Ariel Investments has the largest position in First American Financial Corp (NYSE:FAF), worth close to $229.4 million, amounting to 2.5% of its total 13F portfolio. The second most bullish fund manager is AQR Capital Management, led by Cliff Asness, holding a $84.5 million position; the fund has 0.1% of its 13F portfolio invested in the stock. Some other professional money managers that are bullish encompass Ken Fisher’s Fisher Asset Management, Israel Englander’s Millennium Management and D. E. Shaw’s D E Shaw.

Consequently, some big names were breaking ground themselves. Carlson Capital, managed by Clint Carlson, created the most outsized position in First American Financial Corp (NYSE:FAF). Carlson Capital had $19.2 million invested in the company at the end of the quarter. Paul Marshall and Ian Wace’s Marshall Wace LLP also initiated a $5 million position during the quarter. The other funds with new positions in the stock are Michael O’Keefe’s 12th Street Asset Management, Matthew Tewksbury’s Stevens Capital Management, and Alec Litowitz and Ross Laser’s Magnetar Capital.

As you can see these stocks had an average of 21.5 hedge funds with bullish positions and the average amount invested in these stocks was $276 million. That figure was $620 million in FAF’s case. Newfield Exploration Co. (NYSE:NFX) is the most popular stock in this table. On the other hand Dr. Reddy’s Laboratories Limited (NYSE:RDY) is the least popular one with only 9 bullish hedge fund positions. First American Financial Corp (NYSE:FAF) is not the most popular stock in this group but hedge fund interest is still above average. This is a slightly positive signal but we’d rather spend our time researching stocks that hedge funds are piling on. In this regard NFX might be a better candidate to consider a long position.