It’s very easy to get caught up in the trap of following quarterly earnings in so much granular data that developments in the long term trends can easily be missed. At times, investors are too quick to expect managements to hit quarterly guidance while not focusing on any strategic changes being made. In the case of FedEx Corporation (NYSE:FDX), this would be unfortunate because its numbers reveal some fascinating trends in the economy and the stock offers decent upside.

Federal Express, or should it be Federal Ground?

I’m going to cut to the chase by graphically demonstrating the changes in the composition of FedEx Corporation (NYSE:FDX)’s operating income over the last decade. Up until 2008, the company generated the bulk of its profits from its express service, but ever since the recession, its ground-based revenues have taken over. Why is this so? And what does it mean for FedEx Corporation (NYSE:FDX)?

The three reasons why

The first reason is that — as its management points out — international trade is growing slower than global GDP. This may appear to be counter intuitive, particularly in an increasingly integrated global economy, but, it is a fact. The story of the early 2000’s was one of ongoing strong demand from increasingly consumerist western societies leading to an export led growth boom in China and other Asian economies. As we all know, that party is over for the moment, and China is under pressure to shift towards a balanced economy where domestic demand plays a larger part.

The second consideration is that while we are in a lower growth global economy, it is categorized by oil prices above $100. I recall how we used to fret about oil prices over $30 and speculate how much this would shave of global growth if it occurred! Well $100 oil prices look here to stay and one consequence has been a ‘trading down’ effect where FedEx Corporation (NYSE:FDX)’s customers are more willing to use its slower and less expensive ground services rather than faster, more expensive express services.

The final argument is that the increasing growth of e-commerce has generated strong secular growth prospects for its ground services. In fact, in its last results, FedEx Corporation (NYSE:FDX) outlined that average daily volumes at its SmartPostdivision were up 25%, being primarily driven by e-commerce growth.

Moreover, its rivals like Deutsche Post are investing heavily in parcel shops in order to service e-commerce growth. This is a notable plus in a European economy which is categorized with stagnant growth. Furthermore, Deutsche Post is seeing notably declining demand for traditional mail. It’s been an interesting few years for Deutsche Post as it deals with these changes as well as the disposal of Postbank.

These kinds of structural changes have affected FedEx Corporation (NYSE:FDX). It appeared to gear itself up for a level of demand for its international express revenue that never really came. Consequently, it has under-performed its main rival, United Parcel Service, Inc. (NYSE:UPS). 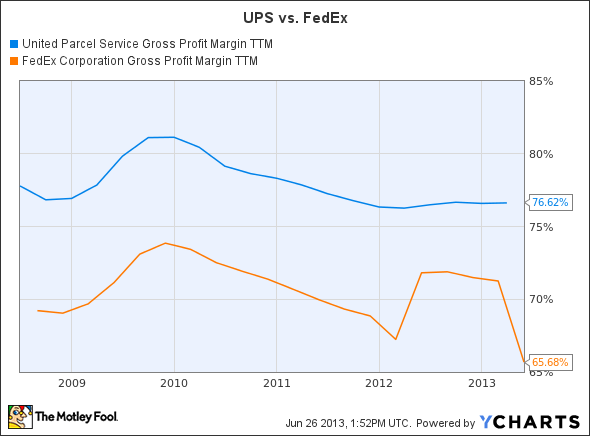 UPS Gross Profit Margin TTM data by YCharts
FedEx has had to take impairment charges while it retires planes and unnecessary routes on its express service. In a sense, this makes it a more interesting ‘growth’ proposition than United Parcel Service, Inc. (NYSE:UPS).The latter offers a near 6% free cash flow yield but lower EPS growth rates than FedEx. Meanwhile, FedEx trades on a free cash flow yield in the low single digits.

FedEx’s greater earnings prospects are largely due ongoing growth in its ground segment, plus the opportunity to make profitability improvements in its express segment. The plan is to generate around $1.6 billion in improvements in express by the end of 2016.While its international yields are expected to remain under pressure, the cost savings and capacity reductions are expected to generate growth. To put this into perspective, FedEx Corporation (NYSE:FDX) trades at 11.3 times EPS estimates for May 2015 while UPS is on 15.2x to December 2014.

The trends identified above don’t look like they are going to go away anytime soon. The difference is that FedEx is dealing with its challenges and the stock represents a good opportunity to benefit from any potential upside from the global economy, the secular trend towards e-commerce plus the successful completion of its cost reduction plans.

Deutsche Post is also an interesting option for investors looking for European exposure while United Parcel Service, Inc. (NYSE:UPS) offers more of a ‘pure’ exposure to global trade growth.However all three are only worth considering if you are positive on global growth.

The article Don’t Miss the Upside Potential of This Stock originally appeared on Fool.com and is written by Lee Samaha.

Lee Samaha has no position in any stocks mentioned. The Motley Fool recommends FedEx and United Parcel Service. Lee is a member of The Motley Fool Blog Network — entries represent the personal opinion of the blogger and are not formally edited.