While the market driven by short-term sentiment influenced by uncertainty regarding the future of the interest rate environment in the US, declining oil prices and the trade war with China, many smart money investors are keeping their optimism regarding the current bull run, while still hedging many of their long positions. However, as we know, big investors usually buy stocks with strong fundamentals, which is why we believe we can profit from imitating them. In this article, we are going to take a look at the smart money sentiment surrounding Federal Realty Investment Trust (NYSE:FRT).

Is Federal Realty Investment Trust (NYSE:FRT) the right pick for your portfolio? The smart money is getting more bullish. The number of bullish hedge fund positions moved up by 1 in recent months. Our calculations also showed that FRT isn’t among the 30 most popular stocks among hedge funds.

What does the smart money think about Federal Realty Investment Trust (NYSE:FRT)?

At the end of the third quarter, a total of 21 of the hedge funds tracked by Insider Monkey held long positions in this stock, a change of 5% from the previous quarter. By comparison, 15 hedge funds held shares or bullish call options in FRT heading into this year. With hedge funds’ capital changing hands, there exists a few notable hedge fund managers who were boosting their holdings substantially (or already accumulated large positions). 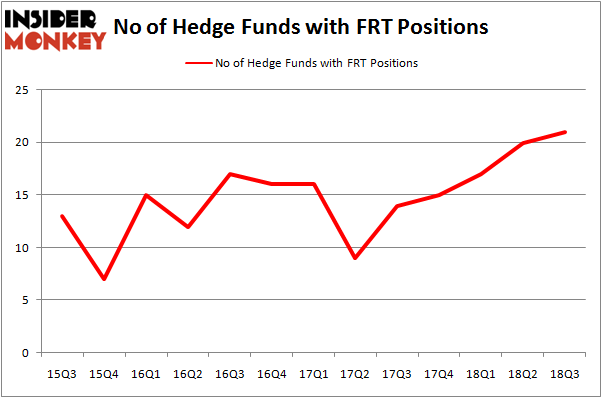 Of the funds tracked by Insider Monkey, Jeffrey Furber’s AEW Capital Management has the most valuable position in Federal Realty Investment Trust (NYSE:FRT), worth close to $87.2 million, accounting for 2.4% of its total 13F portfolio. The second largest stake is held by Millennium Management, managed by Israel Englander, which holds a $56.8 million position; 0.1% of its 13F portfolio is allocated to the company. Some other members of the smart money with similar optimism consist of Ken Griffin’s Citadel Investment Group, Greg Poole’s Echo Street Capital Management and Clint Carlson’s Carlson Capital.

As one would reasonably expect, some big names were leading the bulls’ herd. Forward Management, managed by J. Alan Reid, Jr., established the most outsized position in Federal Realty Investment Trust (NYSE:FRT). Forward Management had $0.9 million invested in the company at the end of the quarter. Matthew Hulsizer’s PEAK6 Capital Management also made a $0.7 million investment in the stock during the quarter. The only other fund with a brand new FRT position is Frederick DiSanto’s Ancora Advisors.

As you can see these stocks had an average of 25.75 hedge funds with bullish positions and the average amount invested in these stocks was $965 million. That figure was $252 million in FRT’s case. Parsley Energy Inc (NYSE:PE) is the most popular stock in this table. On the other hand China Eastern Airlines Corp. Ltd. (NYSE:CEA) is the least popular one with only 1 bullish hedge fund positions. Federal Realty Investment Trust (NYSE:FRT) is not the least popular stock in this group but hedge fund interest is still below average. This is a slightly negative signal and we’d rather spend our time researching stocks that hedge funds are piling on. In this regard PE might be a better candidate to consider a long position.