The Department of Commerce released its final figure for first-quarter GDP growth this morning, revising it downward from 2.4% to 1.8%. In a Reuters poll, economists’ estimates called for the figure to remain unchanged. Nearly all components of GDP growth were revised downward, with the notable exceptions of housing and government. Consumer spending — the largest component of GDP — came in at 2.6% growth, down from 3.4%.

Despite this news, investors in the U.S. stock market continue to shake off their macro jitters this morning, with the S&P 500 and the narrower, price-weighted Dow Jones Industrial Average up 0.81% and 0.79%, respectively, at 10:05 a.m. EDT.

At the beginning of the month, I highlighted government mortgage agencies Federal National Mortgage Association (OTCBB:FNMA) and Federal Home Loan Mortgage Corp (OTCBB:FMCC), commonly known as Fannie Mae and Freddie Mac. As the result of an extraordinary run this year, the stocks now have, to my knowledge, the highest market capitalization of any penny stocks in the U.S. market. 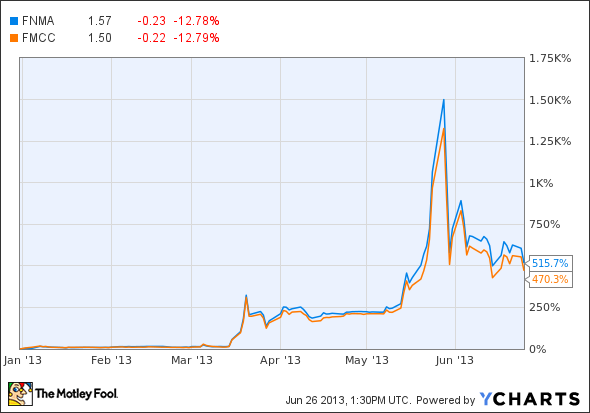 Unfortunately, a bipartisan group of senators is now presenting a bill to wind down both entities over a five-year period, which raises the possibility that equity owners could be wiped out. The bill would replace them with a Federal Mortgage Insurance Corporation, modeled on the Federal Deposit Insurance Corporation.

In aggregate, the two firms have received nearly $190 billion in taxpayer-funded injections in the wake of the credit crisis; the U.S. Treasury now owns roughly 80% of both companies. Fannie and Freddie are scheduled to repay $132 billion to the government at the end of the month.

At the beginning of June, fund manager Fairholme Capital Management, run by famed value investor Bruce Berkowitz, announced that it had acquired a $2.4 billion stake in the preferred shares of Fannie and Freddie (the preferred shares have also enjoyed a huge run-up in price, increasing more than 10 times in value from their 2012 low.) Fairholme has argued that the pair ought to be restructured, but not wound down, saying, “There are no substitutes.”

As enticing as eye-popping returns can be, I would advise individual investors to refrain from betting on the outcome of this saga. There may yet be value in the federal mortgage agencies, but understanding their balance sheets and handicapping the political process requires time and expertise that ought to make this idea an automatic nonstarter for most investors.