So when the largest fund manager in the world, with assets under management approaching $1 trillion, began aggressively buying and recommending municipal bonds to avoid potential tax increases due to the fiscal cliff, the Street took note. Like Treasuries, municipals bonds or “munis” are issued by the government. But instead of coming from the federal government, these bonds are issued by local municipalities like cities, counties and public utility districts.

Gross’ interest in municipal bonds is because of their special tax handling. Unlike Treasury and corporate bonds, municipal bondholders are exempt from paying federal income tax on interest income. Some municipal bonds are tax-exempt on the state level as well. This can translate into big tax savings, particularly for earners in higher tax brackets.

Take SPDR Nuveen Barclays Capital Municpl Bnd (NYSEARCA:TFI) for example, which is an exchange-traded fund (ETF) that tracks the performance of the Barclays Municipal Managed Money Index. Thismunicipal bond ETF’s stated yield is almost 3%, which is an already respectable return in a low-yield environment. But for someone with taxable income of $250,000, falling into the 39% federal tax bracketthat’s supposed to kick in on Jan. 1, 2013, avoiding taxes on this extra stream of income lifts the effective yield of the TFI to about 4.3%. And that’s not including exemptions on the state level, which potentially push yields above 5%.

That’s almost three times the return of the benchmark 10-year Treasury note and better than most investment-grade corporate bond ETFs such as iShares IBoxx $ Invest Grade Corp Bd Fd (NYSEARCA:LQD), which yields almost 4% and the iShares Barclays Credit Bond Fund (NYSEARCA:CFT), which yields 3.5%. But these investment-grade corporate bonds are not tax-exempt, so when you add in taxes from either income or capital gains, then the advantages of municipal bonds are even more pronounced. Those tax savings have driven big capital inflows into municipal bonds in the past three months. The chart below shows the TFI recently hitting a new all-time high. 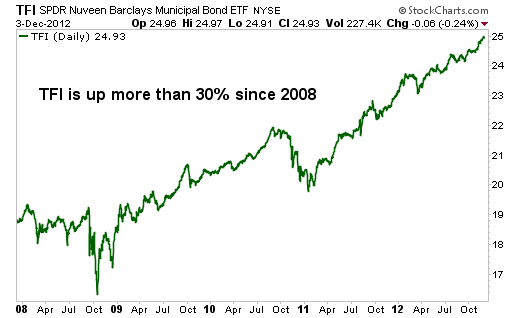 Big institutional investors like Gross are fueling this bullish movement, but retirees searching for income are also driving the trend. Munis are a great way for retirees to invest in relatively stable and secure assets while picking up an outsized, tax-exempt yield. These are the kind of assets we here at Street Authority call “Retirement Savings Stocks.”

Although there is slim chance municipal bonds could lose their special tax treatment in negotiations related to the fiscal cliff, as it stands, there are not too many other places for investors to find tax shelterand a great yield.

Here are three of my favorite municipal bond ETFs.

Warren Buffett News: Did Buffett Smack Down the Dow This Morning?

Gold And The Fiscal Cliff

ETFs For The Special Dividend Craze

What Bernanke, Marc Faber’s Bathroom And Gold All Have In Common
Monthly Newsletter Strategy
Download a free copy of our newsletter and see the details inside!
Hedge Fund Resource Center
Billionaire Hedge Funds