Is Fair Isaac Corporation (NYSE:FICO) the right investment to pursue these days? Hedge funds are getting less optimistic. The number of bullish hedge fund positions decreased by 1 recently. Our calculations also showed that FICO isn’t among the 30 most popular stocks among hedge funds.

At the end of the third quarter, a total of 21 of the hedge funds tracked by Insider Monkey held long positions in this stock, a change of -5% from one quarter earlier. The graph below displays the number of hedge funds with bullish position in FICO over the last 13 quarters. With the smart money’s capital changing hands, there exists a select group of notable hedge fund managers who were increasing their holdings significantly (or already accumulated large positions). 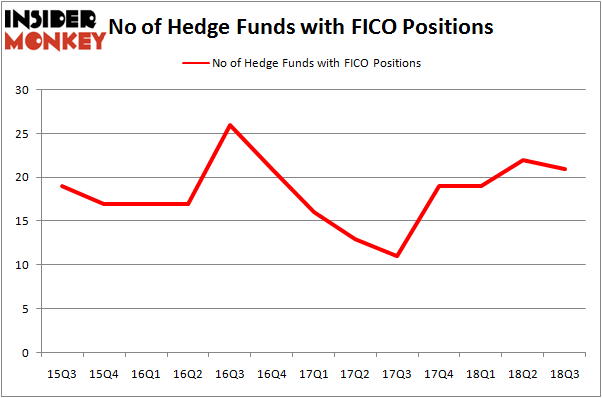 Among these funds, Royce & Associates held the most valuable stake in Fair Isaac Corporation (NYSE:FICO), which was worth $68.9 million at the end of the third quarter. On the second spot was AQR Capital Management which amassed $63.4 million worth of shares. Moreover, Ariel Investments, Sandler Capital Management, and GLG Partners were also bullish on Fair Isaac Corporation (NYSE:FICO), allocating a large percentage of their portfolios to this stock.

Since Fair Isaac Corporation (NYSE:FICO) has experienced falling interest from the smart money, it’s safe to say that there lies a certain “tier” of hedgies that elected to cut their full holdings heading into Q3. At the top of the heap, Matthew Hulsizer’s PEAK6 Capital Management dropped the biggest position of the 700 funds watched by Insider Monkey, valued at an estimated $1.9 million in stock, and Paul Tudor Jones’s Tudor Investment Corp was right behind this move, as the fund cut about $1.3 million worth. These moves are important to note, as aggregate hedge fund interest dropped by 1 funds heading into Q3.

As you can see these stocks had an average of 16 hedge funds with bullish positions and the average amount invested in these stocks was $292 million. That figure was $344 million in FICO’s case. Randgold Resources Ltd. (NASDAQ:GOLD) is the most popular stock in this table. On the other hand Amneal Pharmaceuticals, Inc. (NYSE:AMRX) is the least popular one with only 11 bullish hedge fund positions. Compared to these stocks Fair Isaac Corporation (NYSE:FICO) is more popular among hedge funds. Considering that hedge funds are fond of this stock in relation to its market cap peers, it may be a good idea to analyze it in detail and potentially include it in your portfolio.