It’s been one year since Facebook Inc (NASDAQ:FB) went public. Its highly anticipated $100 billion IPO added a cool $6.8 billion to its coffers, bringing Facebook’s total assets to over $12 billion at the time. What has since happened to all that money, and why should it matter to investors?

Facebook’s prospectus noted that the company didn’t have any specific ideas on how to use its IPO proceeds. But without a clear vision, companies can waste large amounts of money easily — and quickly. Investors are hoping Facebook Inc (NASDAQ:FB) will intelligently shell out its cash to grow the business and eventually justify its forward P/E of 35. But the company’s previous purchases haven’t always seemed wise.

One month before Facebook went public, it shocked analysts around the country by acquiring Instagram — well known for its photo-sharing app — for $1 billion. Whether or not Instagram was a quality acquisition, it seems that Facebook grossly overpaid.

If Facebook Inc (NASDAQ:FB) bought Instagram in order to take part in a growing social picture experience, then it hit the jackpot. At the time of its purchase, Instagram had 25 million-30 million photo-snapping users. Now, just a year later, there are 100 million-plus. But if the goal was to make money, well — the app still brings in $0.

Shutterfly (NASDAQ:SFLY) shares plummeted nearly 20% with the news of the Facebook – Instagram tag team. Those fears have now subsided, since Instagram images can be uploaded and printed with Shutterfly’s service. The latter company has even rolled out its own app to better combat Instagram.

One might wonder why Facebook Inc (NASDAQ:FB) didn’t just buy Shutterfly. The company was valued around $1 billion at the time: 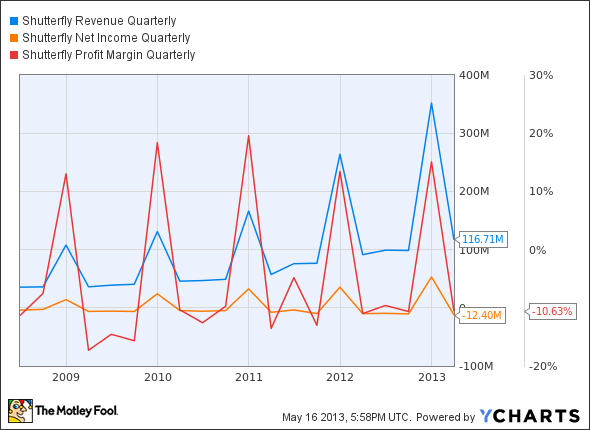 Those numbers aren’t too pretty, but Shutterfly’s $117 million in quarterly revenue is a good start. Also note that by offering a fully integrated service with Instagram, Shutterfly has actually been more successful than Facebook in monetizing the app. There are uncertain rumors that Instagram may run ads one day, which could start paying back Facebook Inc (NASDAQ:FB)’s investment. But for now, we’ll have to wait and see.

Show Me the Money

Here’s a look at Facebook’s financial situation since going public. 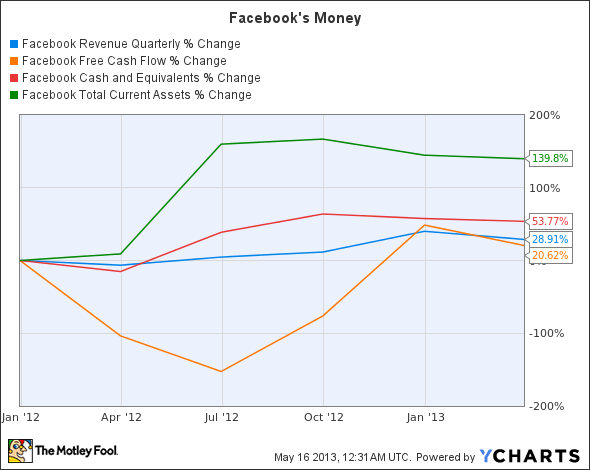 Does it surprise you that the company is still loaded? That’s right — Facebook hasn’t spent its allowance yet. Becoming profitable has helped keep its cash assets as high as they are. Last quarter, Facebook generated $392 million in free cash flow.

But don’t be fooled into thinking that Facebook isn’t buying anything. Recently, it announced the acquisition of Microsoft (NASDAQ:MSFT)‘s advertisement branch Atlas. Many analysts see this as a direct assault on Google (NASDAQ:GOOG)‘s  ad empire.

A more conservative view suggests that Facebook is looking to improve the revenue it gets from its existing advertisements. Atlas helps advertisers assess and analyze their ads. If advertisers can see the effectiveness of the ads they are running, they’re more likely to increase spending on advertising — and thus create revenue for Facebook. Whether as an assault on Google or an improvement on Facebook’s ad system, buying Atlas is a bright move.

But for Microsoft, selling Atlas is an admission of failure. Atlas was a part of aQuantive, which Microsoft purchased for $6.8 billion in 2007. That purchase was seen as the move that would help Microsoft catch Google in advertising revenue … which never happened. It’s true that Microsoft’s ad revenue from Bing grew 18% in the most recent quarter, to $832 million. But that still pales in comparison to Google’s $11.9 billion, and lags behind Facebook’s $1.25 billion.

Online ad forecaster ZenithOptimedia predicts that internet advertising revenue will surpass revenue from traditional sources by 2015. If that’s true, it means Facebook is investing where it counts.

Loads of cash without a clear-cut vision is generally a recipe for recklessness. But Facebook still has tons of cash. We see that it’s spending that money in certain meaningful areas, rather than on a random spree. So really, the Instagram acquisition taught us that Facebook wants to spend its money carefully — but it’s not afraid to pull the trigger when it sees an opportunity it likes.