Companies 0 See All
Hedge Funds 0 See All
Insiders 0 See All
Institutional Investors 0 See All
Click here to see all results for Sorry, no results has been found matching your query.
Bitcoin-Ethereum and Other Cryptocurrencies-Market Movers-News-Tech

Facebook, Inc. (FB) Wants to Be More than a Place to Humblebrag About Your Life

Published on June 16, 2019 at 6:04 pm by Insider Monkey Staff in Bitcoin, Ethereum and Other Cryptocurrencies, Market Movers, News, Tech

Facebook, Inc. (NASDAQ:FB)  started out as a simple website for Harvard students to connect with their schoolmates. It then became the coolest place for college kids to hangout. By December 2006, Facebook (NASDAQ:FB) was already open to everybody and it boasted 12 million users. Over the last decade, Facebook (NASDAQ:FB) has transitioned from being a place to connect with friends and “stalk” your crush, to becoming a global advertising giant, an ecommerce aggregator, and a platform that can supposedly skew the outcome of elections.

Now, researchers at Monfex, a UK-based trading platform that’s on a mission to “simplify the global financial system” thinks that Facebook (NASDAQ:FB) is making the right steps to transition into a financial services company. If it succeeds, Facebook (NASDAQ:FB) could go on to become the world’s most powerful bank. Monfex has a ringside seat into developments in the cryptocurrency industry as it operates a trading platform that facilitates leveraged trades while providing the tightest spreads and lowest commissions in the industry. 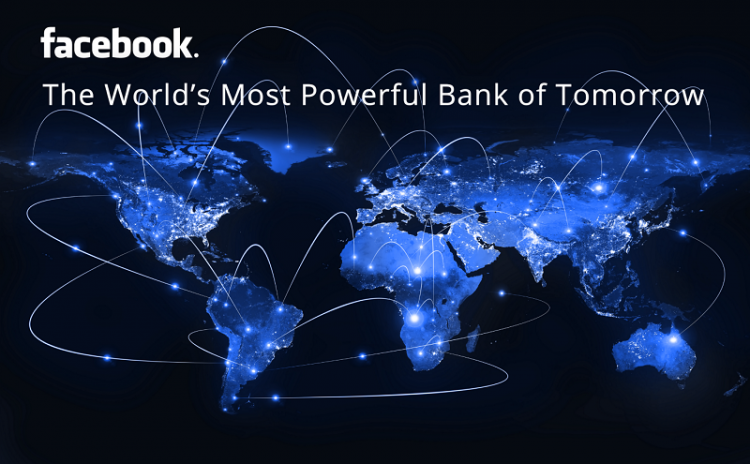 If Facebook (NASDAQ:FB) was a country, it would probably be the most populous country in the world based on latest numbers. The social media giant has 1.56 billion Daily Active users as at March 31, 2019. In contrast, China has a population of 1.42 billion people, India’s population is about 1.37 billion people and the United States only has about 329 million people.

The Chinese have the Yen, Indians have the Rupee; every nation has its legal tender but for the 2.5 billion registered users across Facebook, Instagram, and WhatsApp; there’s simply no globally accepted currency for the transfer of value. Going beyond Facebook (NASDAQ:FB) into the digital economy; there is no globally accepted digital currency.

The arrival of cryptocurrency and the incredible growth of the industry over the last 10 years has confirmed the need for a global peer-to-peer currency for digital payments. Unfortunately, no cryptocurrency has succeeded in breaking out into mass-market adoption as a means of exchange.

Monfex analyst, Alex Sovpel, in the report referenced above observed that “not a single cryptocurrency is used for the daily transaction needs of billions of consumers. The demand for existing cryptocurrencies comes primarily from investors and traders, not consumers.”

Last week, the BBC reported that Facebook (NASDAQ:FB) is creating GlobalCoin, a blockchain-powered stablecoin that will be pegged to a basket of currencies. Facebook’s plan to create GlobalCoin is rooted in the fundamentals of an untapped remittance market. Foreign workers made more than $600 billion in remittances in 2018 and the bulk of those transactions were facilitated by Western Union and MoneyGram, which charge an average of 7% and 5.6% and as high as 30% in FX transfer fees. Facebook’s GlobalCoin’s negligible or zero transfer fees and its global reach would make it highly competitive for global remittances.

Facebook (NASDAQ:FB) is also getting into the cryptocurrency industry to facilitate financial inclusion for the world’s unbanked 1.7 billion people. Developing countries still run predominantly cash-based economies. However, the rapid rise in digital penetration could provide Facebook (NASDAQ:FB) with a launchpad to position its GlobalCoin as a currency without borders.

Lastly, Facebook (NASDAQ:FB) could unlock exponential growth in its advertising business to outpace Google in ad revenues if it succeeds in getting its GlobalCoin to become a generally accepted means of exchange.

Facebook (NASDAQ:FB) will technically be able to access users’ transactional data and such data provides a goldmine of information about what its users buy, where they buy it, from whom they buy, and their spend on different classes of goods. Of course, privacy concerns and regulatory issues might make it difficult for Facebook (NASDAQ:FB) to mine such data. Nonetheless, access to such data would make the Facebook (NASDAQ:FB) ad network super attractive for advertisers because they can deliberately target users more accurately.

Alex Sovpel has predicted that Facebook’s GlobalCoin has the potential to become a reserve currency in developing countries, much like the US dollar is today. For example, he posits that if GlobalCoin captures just a quarter of offshore banking and emerging market fiat currency reserves, “then it becomes a $10 trillion asset, just by itself.”

Alex has a long history of making successful predictions about the prospects of different coins and the entire cryptocurrency market. For instance, in May he was one of the first analysts to predict that Bitcoin will breakout about the $8,000 resistance – the prediction came true a few days later.  He also has a standing bullish prediction that Bitcoin will soon breakout above $10,000. We will be watching to see how his prediction on Facebook’s GlobalCoin pans out.