Remember all that hype about Facebook Inc (NASDAQ:FB) stock when the social network went public at $38? The valuation was astronomical, critics complained. As the shares continued to fall as low as $17.55 in the coming months, the bears were emboldened. It became commonplace to liken the Facebook euphoria to the dot-com bubble.

But today it’s a different story. The stock is back above its IPO price, analysts are excited, and the stock is on a run. What’s changed?

Facebook in the summer of 2012: Can Facebook Inc (NASDAQ:FB) monetize mobile?
Just about a year ago, Forbes writer Eric Savitz pitched in with some expert-sounding investment advice:

[E]ven at $20 and change, the stock is no statistical bargain. … The problem is that the stock was so outrageously expensive when it went public that the shares STILL look expensive versus almost any other technology company. … The bottom is out there, but I’m not convinced this is it.

He certainly was right: $20 wasn’t the bottom for Facebook Inc (NASDAQ:FB) stock — but it was pretty dang close. The stock now trades at more than a 100% premium to its all-time low of $17.55.

But let’s give Savitz some credit, as his underlying thesis was based on a legitimate concern. “[W]hat I think we do know is that unless Facebook can do something to improve its growth rate, there seems little obvious reason for it to trade at a gigantic premium to Google,” he explained.

Sure enough, Facebook Inc (NASDAQ:FB)’s 2012 second-quarter results certainly weren’t indicative of a growth company worthy of its P/E ratio of about 85 at the time. Revenue was up 32% from the year-ago quarter — nice in isolation, but not when valuation was taken into consideration.

Even more, Facebook’s mobile revenue at the time amounted to zero, zip, nada.

In hindsight it seems silly, but investors wondered: If the company makes money from ads on the side of the feed now, how will it ever fit them into a small smartphone display without being obtrusive to the experience?

Of the company’s 955 million monthly active users, or MAUs, 543 million were mobile — and Facebook Inc (NASDAQ:FB) hadn’t figured out how to monetize them. Uncertainty prevailed.

It worked. Ads in the feed, a redesigned timeline, and improved ad products helped the company enter a new phase of growth. Facebook Inc (NASDAQ:FB) was executing swiftly.

Today Facebook has undoubtedly proved that not only can it monetize mobile, but also that it can excel in mobile.

The impressive second-quarter results have investors more confident than ever in the company’s future.

Since the results were released, the stock has been soaring. 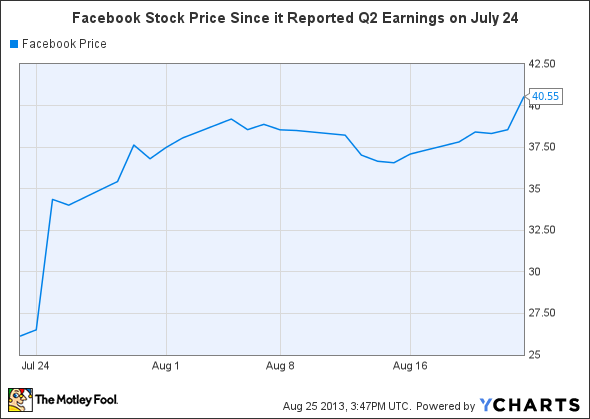 Facebook tomorrow
The company has certainly proved it can succeed in the modern connected environment. Even more, its strong network effect, bolstered by 699 million daily active users, or DAUs, practically secures the company’s position as the go-to social network for years to come.

But unfortunately, price does matter. At 15.8 times sales, or more than three times Google’s 5.1 price-to-sales ratio — the stock isn’t something I can make a bullish call on right now.

Sure, I’m far from ending my CAPScall on the stock. But if I bought into it at today’s price, it would be a small nibble with expectations for a very volatile ride.

At the same time, the company’s powerful network effect and proven ability to monetize mobile give the company the enduring characteristics I’m searching for — so that “small nibble” sounds pretty tasty right now.

The article Facebook at $40: Wasn’t This an Overvalued IPO Dud? originally appeared on Fool.com.