Shares of Google Inc (NASDAQ:GOOG) recently rose about the $800 level, hitting new all-time highs as bullish analysts started to claim that $1,000 per share may not be too far away.

With a forward P/E of 15 and a 5-year PEG ratio of 1.26, the stock certainly looks cheap enough to go all the way, and its top and bottom line growth tell a similar story. 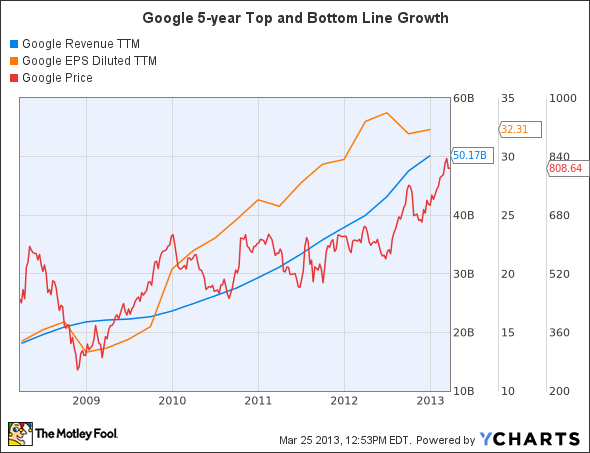 But this isn’t a gushing, bullish love letter to Google Inc (NASDAQ:GOOG) – the Internet is filled with enough of those already. In this article, I’d like to discuss three things I absolutely hate about Google. Whether or not these three factors will impact the company’s earnings in the near future is debatable, but in my opinion, they are three major problems that investors should pay attention to.

Google’s $12.5 billion acquisition of Motorola Mobility in May 2012 was a terrible move. The acquisition, which was made to strengthen its patent portfolio against Apple and Nokia, has weighed on the company’s margins and caused expenses to rise all throughout 2011 and 2012. 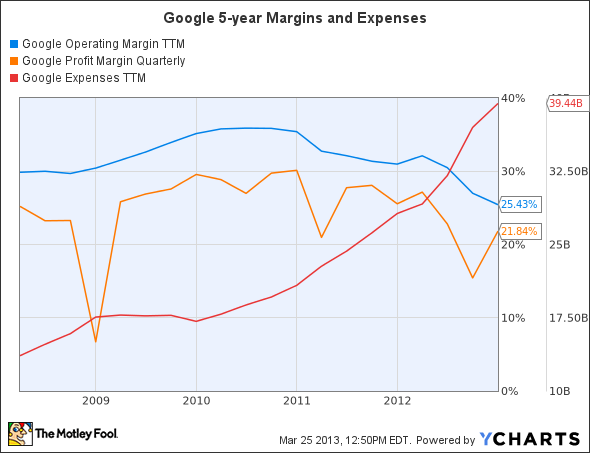 Last quarter, Motorola Mobility generated $1.51 billion in revenue, but post a net loss of $353 million. Google Inc (NASDAQ:GOOG) now intends to cut 1,200 jobs at Motorola, in an effort to stem its losses – which will cause the company to incur some heavy severance costs in the coming year. Google also doesn’t plan to heavily expand Motorola’s hardware offerings, given the crowded state of the market – making Motorola nothing more than an overpriced insurance policy against patent litigation.

Despite Google Inc (NASDAQ:GOOG)‘s best efforts, the company still doesn’t hasn’t made a dent in social networking. Google+ has 265 million active users, less than a third of Facebook Inc (NASDAQ:FB)’s 1.06 billion active users. Despite Facebook’s saturation levels, it is still rapidly growing, and is supported by the rapid adoption of mobile devices such as smartphones and tablets. In most countries, Facebook is a staple application on Android, iOS and Windows Phone devices. The same can hardly be said of Google+, which is a virtual ghost town by comparison.

What Google is failing to understand is that people only need one social network for sharing updates, photos and videos – and that network is going to be the one all their friends and families are subscribed to – Facebook Inc (NASDAQ:FB). Uploading the same photos or videos to Google+ is redundant, and while most people who have a Google+ account also have Facebook, not all people who use Facebook are on Google+.

Therefore, Facebook Inc (NASDAQ:FB)’s recent release of Graph Search could be the killer app that seriously wounds Google. Graph Search allows users and advertisers to input intelligent social searches, such as, “Show me Mexican restaurants that my friends have visited in the past year.” Graph Search aims to give users more personalized search results than standard queries on Google.

Graph Search could also make it easier for advertisers to create targeted advertisements for certain demographics, by checking off a checklist of desired social criteria. The possibilities become tantalizingly endless for prospective advertisers.

In the end, that’s Google Inc (NASDAQ:GOOG)’s weakness in social networking – it still approaches the Internet as a top-down search, just like Yahoo! Inc. (NASDAQ:YHOO) and Microsoft Corporation (NASDAQ:MSFT)‘s Bing. Meanwhile, Facebook Inc (NASDAQ:FB) has infiltrated the Internet from the inside, and is gathering individual interests and forming them into a searchable database by expanding across a web of social connections. That “inside out search engine” could seriously hurt Google in the long run.