Shorting stocks can often get a bad rap in the media, but the reality is that it plays a vital role in the market. Without short-selling, there would be less incentive for stocks to go down, because the only way to profit would be when shares went up. There have been bubbles in areas where short-selling was restricted.

Betting against stocks is also a great way to make money when the overall market goes down. I’ve highlighted three stocks that I think are overvalued and are worth shorting right now. Let’s take a look.

Facebook Inc (NASDAQ:FB)
The Facebook craze is over. I’m sorry to tell you, but people under 30 are leaving Facebook for Twitter, Vine, and whatever else the tech world can come up with next. The problem with Facebook is that it wasn’t built as a moneymaking machine; it was built as a social network. So when you try to jam ads into people’s timelines or sell their content, there’s a backlash.

The ad backlash is bad, but the bigger problem for Facebook Inc (NASDAQ:FB) is that having teens and grandparents on the same social network isn’t good for growth. Facebook just isn’t “cool” anymore, and that’s what Facebook’s investors should worry about most.

Then there’s valuation to worry about. Forget the price-to-earnings ratio — even price-to-sales is insanely inflated. 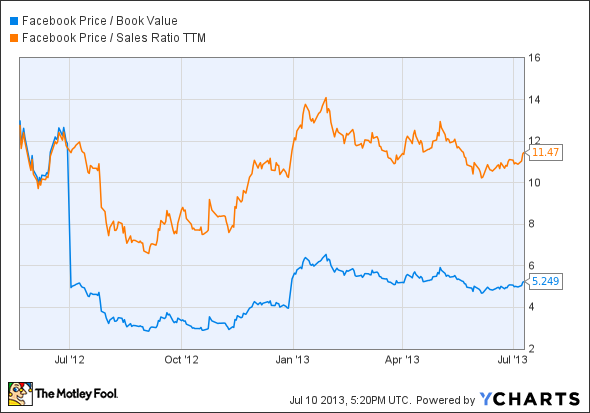 To grow into expectations, Facebook would have to grow in excess of 30% for at least five years, and I think by then most people will have moved on to a new network for their social needs.

Sprint Nextel Corporation (NYSE:S)’s stock is up 26% since Softbank first approached the company with an offer to buy 70% of its shares and infuse cash into the business, but that stock market success doesn’t mean it will make Sprint a giant in wireless. The core problem for Sprint is that it doesn’t have the sheer size to compete with Verizon Communications Inc. (NYSE:VZ) Wireless or AT&T Inc. (NYSE:T). Wireless networks require billions of dollar in investments, which customers than pay for in small monthly payments. The bigger the network, the more money invested, the bigger the draw you are to customers.

Just look at the sheer size difference between the amount of capital assets these three companies own. Sprint Nextel Corporation (NYSE:S) is dwarfed by its bigger rivals. 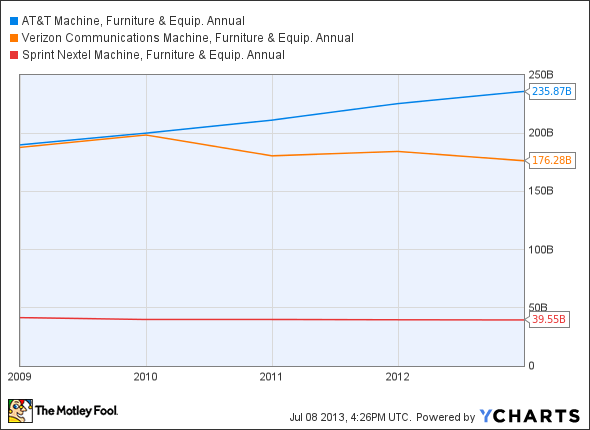 This is important from a competitive perspective, because Sprint Nextel Corporation (NYSE:S) simply doesn’t have the ability to build a network that can compete with Verizon Communications Inc. (NYSE:VZ) Wireless or AT&T Inc. (NYSE:T). The past year has shown exactly what an uphill battle the company faces. Sprint’s subscribers were down 1.3% to 47.3 million, while Verizon Wireless was up 6.4% to 89.9 million and AT&T was up 3.2% to 107.3 million. Sprint is in a distant third place, and it simply doesn’t have the scale to catch up, even with the help of Softbank. Once the support Softbank provides is gone, I think these fundamental problems will catch up with the stock.

Molycorp Inc (NYSE:MCP)
The rare earth metal scare is over. You don’t hear of companies worrying about rare earth supplies, countries are no longer stockpiling, and it isn’t a topic in political interviews. For Molycorp, that means falling profits despite the fact that it’s finally producing a large quantity of rare earth minerals.

Related Insider Monkey Articles
Apple Inc. (AAPL): Why I’m Skeptical of a Successful iWatchZynga Inc (ZNGA) Might or Might Not Turn Around, so You Should Consider Alternatives...AT&T Inc. (T): The Birth of the Telecom Industry and the Accidental Nat...
Hedge Fund News: Bill Ackman, FedEx Corporation (FDX), Citigroup Inc (C)Facebook Inc (FB), Microsoft Corporation (MSFT): Is This What Killed the Middle...International Business Machines Corp. (IBM) Rains on the Dow’s Parade
Monthly Newsletter Strategy
Download a free copy of our newsletter and see the details inside!
Hedge Fund Resource Center
Billionaire Hedge Funds