Facebook Inc (NASDAQ:FB) Home was launched to the surprise of many who were waiting for the social networking giant to launch its own smartphone or at least an operating system.

Facebook Home for Android replaces the home screen for Android phones with a Facebook Inc (NASDAQ:FB) platform that houses the user’s Facebook homepage. The home screen platform has been receiving positive reviews since its launch in April, but not without a few critiques.

The biggest critique of all is about its impact on Google Inc (NASDAQ:GOOG), considering the fact that it replaces Android’s home screen for everyone who installs the platform.

Facebook Inc (NASDAQ:FB) now has approximately 1.1 billion members, which is a large network of people looking to socialize. However, the goal is now changing to making money out of the massive social network of individuals and companies.

There is no doubt that Facebook is one of the most popular brands globally, having been ranked 10th overall in 2013, (data by Syncforce.com). However, this popularity is not reflected on the stock’s performance.  Facebook Inc (NASDAQ:FB) had embarked on a rally early on in the year, hitting a new 52-week high in January. The company fell towards the end of the first quarter 2013, but rose marginally after the announcement of Facebook Home. However, that gain has since been lost with the stock now hovering under the $25 mark. 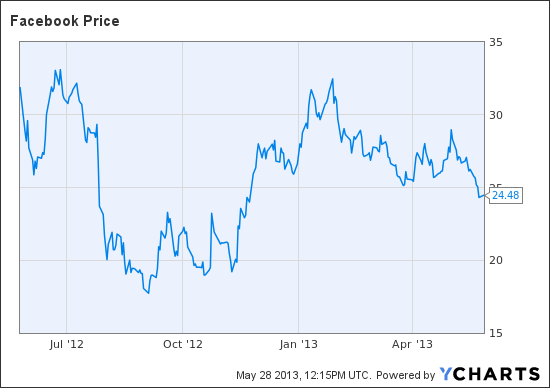 The stock is clearly losing friends in the investment community, and not even Facebook Home could support a sustainable rally, despite the social media company’s obvious recovery.

The company reported $1.46 billion in revenue, up 38% year-over-year, but reported a flat non-GAAP EPS of $0.12. Analysts had projected revenue of $1.44 billion and EPS of $0.13. The company’s advertising revenue increased by 43% from the first quarter last year following a successful ad campaign, which saw the company launch Sponsored Stories, Promoted Posts, the Gift Service and Facebook Exchange (FBX) among other things. Facebook Inc (NASDAQ:FB)’s disappointing first quarter results marked the beginning of the current plunge. It has now lost $4.66 per share since the announcement of the results, or 16% of its market value.

Facebook Home is not home for everyone and will definitely face strong headwinds.

Not everyone wants the Facebook Inc (NASDAQ:FB) platform to be the first thing they come into contact with the moment they switch on their phone. For this reason, a good chunk of Android platform users would rather stick with the current Android home, than install Facebook Home. This means that the social networking giant should not be counting on 75% of its users who are on Android platform smartphones to adopt the new Home. Additionally, only a select few of Android devices are able to integrate with the new Facebook Home, including HTC One X ,HTC One X+ and HTC one, as well as Samsung Galaxy S3, Samsung Galaxy Note 2, and the new Samsung Galaxy S4. This population covers just a fraction of the 75% market share that Android smartphones command, according to first quarter, 2013 shipments data by IDC.

Android is freeware, meaning Google Inc (NASDAQ:GOOG)’s revenues from the platform have nothing to do with subscriptions, or license fees from partners like Samsung. The company relies entirely on advertisements made via its platform.

With Facebook Inc (NASDAQ:FB) home replacing Android phones home screen, this places Google at a grave danger of losing out on ad revenues. People will now be drawn into Facebook’s ecosystem once they switch on their phones, diverting them from Google Inc (NASDAQ:GOOG) services and ads.

Statistically, people spend at least 20% of their time on Facebook, going by Mark Zuckerberg’s recent quarterly call transcript. This is the highest rate of engagement in the industry, compared to statistics reported by other web-based companies like Google and LinkedIn Corp (NYSE:LNKD). Facebook Inc (NASDAQ:FB) has made the clever move to exploit Google Inc (NASDAQ:GOOG)’s policy of allowing app developers to post their apps on its platform without having to seek approval. This is where Apple Inc. (NASDAQ:AAPL)’s policy reaffirms the ability to control what is placed on the iOS platform and the benefits to the iPhone maker. No single app goes live on iOS before it’s approved by Apple.

It is quite clear now that everything comes at a cost. Being open source software, Google’s Android platform can claim 75% market share. However, this places the company at the danger of losing some of the benefits associated with this massive share of the smartphone platform market, which might prompt it to rethink its Android apps policy going forward. With time, a majority of the Android smartphones should be able to integrate with the new Facebook Home, thereby widening Facebook’s addressable market on the platform.