F5 Networks, Inc. (NASDAQ:FFIV) provides solutions that optimize and secure networks.  They are right in the middle of a huge market resulting from the need to process large amounts of data faster and also protect networks from growing security threats.  I have long been a fan of F5 Networks, Inc. (NASDAQ:FFIV).  It’s been on my list of Top 5 Tech Stocks for both Fall 2011 & Fall 2012.  I also put it in the portfolio of 10 Stocks for 2013, which unfortunately hasn’t worked out well thus far.

F5 stock has been a great buy on pull-backs up to this point.  However, in the past, these pullbacks were not entirely driven by F5 itself.  Most of the pullbacks were based upon external worries such as the Japan Tsunami, a slowdown in Europe and potential U.S. government spending cuts.  As you can see from the chart below, these concerns provided great short-term buying opportunities when the stock got hammered into the $70’s and $80’s. 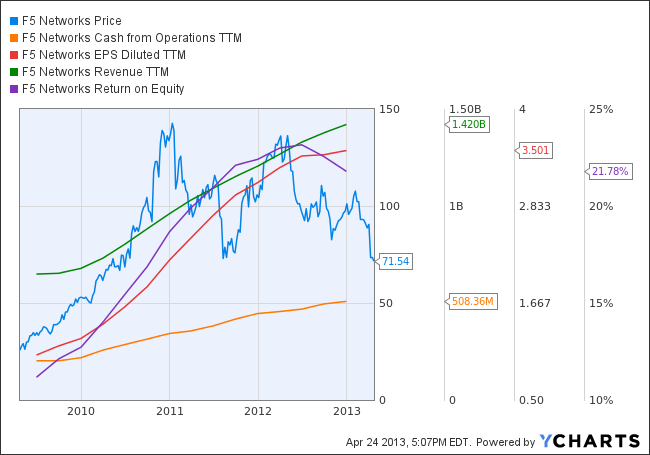 This time, the sharp decline was driven specifically by F5 Networks, Inc. (NASDAQ:FFIV)’s preannouncement of Q2 earnings and revenue shortfalls back on April 4.  On the Q2 earnings call on April 24, management noted that project delays and less government spending caused the shortfall, while enterprise spending remained strong.

Management also announced a $200 million share repurchase program in the hopes of bolstering its stock.  I’m not a fan of this strategy.  True growth companies should be focused on using the cash to continue growing and returning value to shareholders by increasing market capitalization.  Reducing share count and/or providing dividends should be strategies of well-established, slow-growth companies that don’t have a ton of options for growing organically in any significant way.  Focus less on the current stock price and more on growing the company.  If you do that, the stock price will take care of itself.

The market is plenty large for both F5 and a Cisco Systems, Inc. (NASDAQ:CSCO)/Citrix partnership to be successful.  Time will tell if either of these becomes a market leader and obtains a dominant market share position for the long-term.

At a P/E of around 20, F5 isn’t insanely valued.  The problem is that they need to show some signs of growth rather than discussions of delayed projects and timid government spending.  Otherwise, the P/E and/or share price will decrease very quickly.

The price-to-sales ratio of 4 is a little concerning, especially without revenue growth.  If revenue is growing, then investors can justify a price-to-sales of 4, but otherwise that could quickly get cut in half. 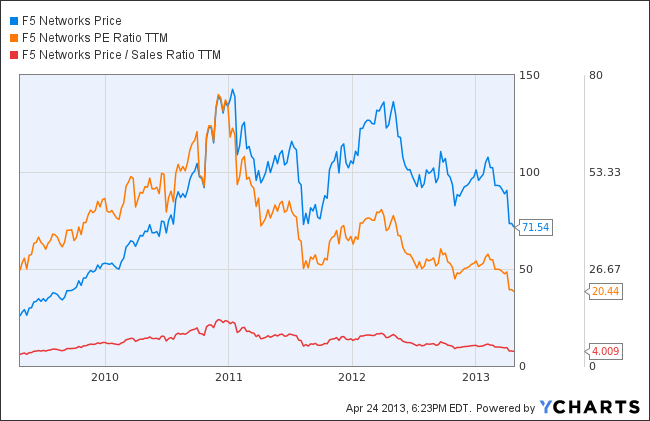 For the first time in a while, F5 Networks, Inc. (NASDAQ:FFIV)’s revenue, EPS and return on equity (ROE) are starting to trend downward in a concerning way.  The project delays and lack of government spending can be looked at in two ways.  The bullish argument would be that the projects are delayed but will later be spent, and the government spending will come back eventually.  The bearish argument would be that tech spending overall is clearly declining and competition for F5’s offerings is heating-up.

I am in the middle of these two sides after F5’s most recent quarter.  Nothing in this quarter indicates a disturbing long-term trend.  At the same time, decreases in revenue, even if short-term, don’t lie.  That’s why I’m putting F5 stock in the penalty box until it reports another quarter.  This is not a dip that I’m jumping to buy.  I still own the stock from before the decline, but won’t be buying any additional.

Interestingly, even with all of its up and downs, F5 Networks, Inc. (NASDAQ:FFIV) stock has outperformed both Cisco and Citrix over the past four years (since the market crash).  I wouldn’t be surprised if this continues to be the case.  Hopefully for F5, this dip is temporary again.  But unlike the other dips, I’ll take a pass and wait to see how the third quarter plays out before I get back in. 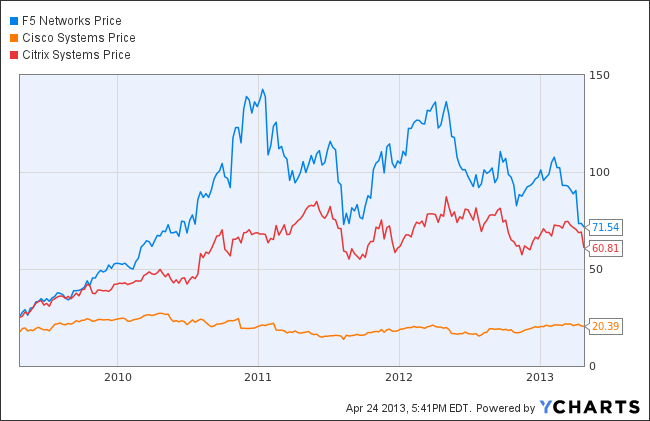 Thanks for reading!  More updates to come as this story plays out.

The article F5 Networks Goes in the Penalty Box originally appeared on Fool.com and is written by Dave Zaegel.