Recently the 197-year-old Farmers’ Almanac predicted that the 2014 Super Bowl could be facing winter conditions that have some already dubbing it “Storm Bowl.” This will be the first Super Bowl held outdoors in a cold-weather environment — at MetLife Stadium in New Jersey — and if the predictions are correct, it will be a cold one. A snowy Super Bowl, which will certainly be memorable and not likely repeated, has investment ramifications as well.

The U.S. Department of Energy has noted an uptick in natural gas demand for power generation in the face of the current August hot streak, but with predictions of a particularly cold winter, you can expect demand to stay strong. This is great news for Chesapeake Energy Corporation (NYSE:CHK), the world’s second largest natural gas producer after Exxon Mobil Corporation (NYSE:XOM). The Energy Information Administration report does point to growing stocks of natural gas, but with the medium-term outlook, this may be a good time to get exposure to the commodity.

The big game
The Farmers’ Almanac, which was first published in 1818, uses methods that most scientists don’t consider to have much validity: sun spots, tidal action, and planetary positions. With that in mind, the Almanac claims that its predictions are correct about 80% of the time. Managing editor Sandi Duncan left little room for interpretation: “We’re using a very strong four-letter word to describe this winter, which is C-O-L-D. It’s going to be very cold.” Whether you put much stock in the Farmers’ Almanac, the NOAA is predicting a cooler and wetter winter for large parts of the country, although Super Bowl 2014 seems to fall into the normal band for both temperature and precipitation.

The gas play
It can be challenging to think about the cold weather ahead when considering a natural gas investment in the middle of the hottest weather of the summer, but it is a great reminder of how important climate is in factoring demand. A recent Bloomberg report suggests that the hotter-than-expected weather is lifting demand and helping to drive prices. Chesapeake Energy Corporation (NYSE:CHK) shares are up more than 13% in the past month, as the commodity’s price has been strong. 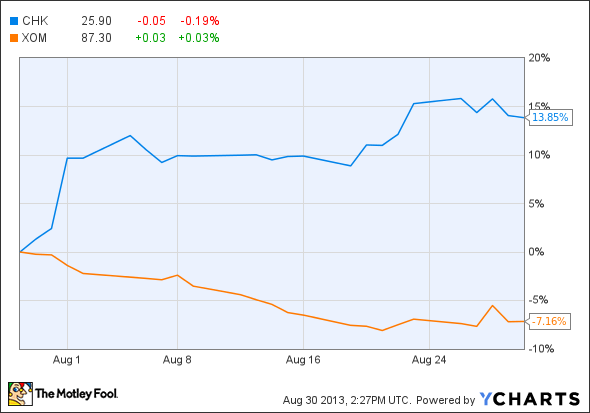 Despite the recent strength in Chesapeake Energy Corporation (NYSE:CHK) shares, the prospect of a cooler-than-expected winter gives the stock a favorable medium-term outlook. Even with the builds seen in natural gas stockpiles, there seems to be some normalization of supply, making it less likely that prices will be driven back to April 2012 lows again. Rather, as we prepare to bundle up for another NFL season, Chesapeake Energy Corporation (NYSE:CHK) has some appeal to score for your portfolio.

The article Will Chesapeake Benefit From a Wintry Super Bowl? originally appeared on Fool.com and is written by Doug Ehrman.

Fool contributor Doug Ehrman has no position in any stocks mentioned. The Motley Fool has long January 2014 $30 calls on Chesapeake Energy.