BP’s 2013 Statistical Review of World Energy comes with a treasure trove of information. One the most informative pages looks at the world’s changing reserve to production ratio. Oil companies find oil, then extract it, refine it and sell it. If companies cannot replace their reserves, then their way of life is over. Over the past ten years, regions like South America and Africa have been some of the few places where the reserve to production ratio has increased.

The majority of South America’s reserve growth in the past decade has come from Venezuela’s heavy oil fields. This is a challenge for U.S. energy companies, as the Venezuelan government nationalized the oil sector and seized a number of assets. Exxon Mobil Corporation (NYSE:XOM) had operations in the country, but now it expects to get just $255 million for its former assets. Despite this, Exxon Mobil Corporation (NYSE:XOM) hasn’t been afraid to look elsewhere. It hopped across the ocean to Angola where it has deep-water operations. It is also exploring off the cost of South Africa.

The Brazilian Petroleo Brasileiro Petrobras SA (ADR) (NYSE:PBR) has also played a big role in growing South America’s oil potential, with many deep-water finds. The problem is that these areas are very expensive to develop. The company has been forced to set aside $106.9 billion for production development from 2013 to 2017.

Another important play in South America is Argentina. The government recently removed its national oil company from Spanish hands. Now the country is looking for foreign investment to help it extract oil from its Vaca Muerta region. 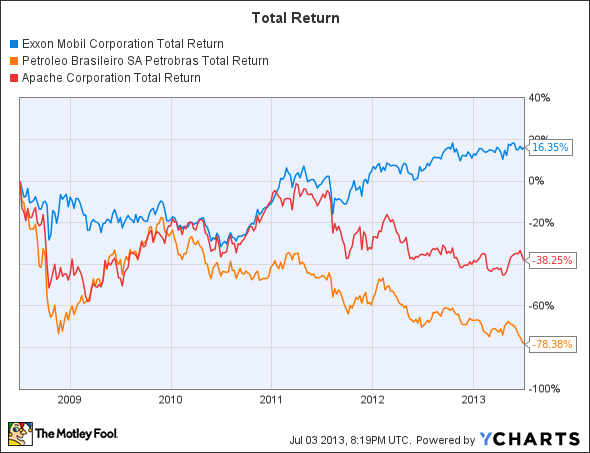 Exxon Mobil Corporation (NYSE:XOM) is the old vanguard of the oil industry. It boasts a very strong return on investment (ROI) of 27.3% and a low total debt to equity ratio of 0.08. Out of the three companies listed here, Exxon Mobil Corporation (NYSE:XOM) also has the strongest return on equity (ROE) of 28.5%. This company’s downside is that it is so huge that it needs to keep making major discoveries to maintain its current production. In the long run its growing liquefied natural gas (LNG) assets should be to stabilize its income.