What is the future of technology, energy, and the economy? Investors who know the answers to these three questions can profit handsomely. After all, every investment is made under the assumption that something tangible will happen in the future. Because of this, we can’t help but want to guess, and make an intelligent one at that.

I think that energy is one of the most important commodities in the market. Without energy, an economy simply cannot function. Many are wondering where we will find dependable sources of energy, and what peak-oil really means. Does that mean we will not be able to drive our cars on a Sunday afternoon? Does it mean that prices will become so prohibitive that the economy will crash? There are all sorts of theories.

Exxon Mobil Corporation (NYSE:XOM) projects that conventional crude oil production will decline from 2010 onwards. Crude oil will have to be extracted from unconventional sources like deep water drilling, and oil sands. Natural gas liquids will become an increasingly larger source of energy as well as other liquids like biomass (algal biofuels). This will have a negative impact on oil companies. Alternative sources of energy cost more to produce, thus lowering gross margins. The added cost of production should keep investors mindful of future changes in the energy mix. Also, demand for crude oil may eventually taper as consumers shift to hybrid and electric vehicles.

Cost effective electric vehicles from GM, Ford, and Tesla Motors Inc (NASDAQ:TSLA) will be hitting the market soon. The CEO of Tesla Motors Inc (NASDAQ:TSLA) believes that it can release an electric vehicle in the $30,000 price range over the next three to five years. Given the time frame mentioned, the fuel-mix projections over the next 20 years are likely to be wrong because the upstream market for energy on the utility side of the market is much different from the one for automobiles.

The differences come from the fact that oil refiners can use varying sources of material to refine into typical gasoline (the selection is primarily crude oil, natural gas, and biomass). However, with electric utilities, and battery technology, a much broader mix of energy can be accepted for use (nuclear, coal, solar, hydro, and so on).

The projections indicate that demand for renewables will grow exponentially.

Solar will power the future 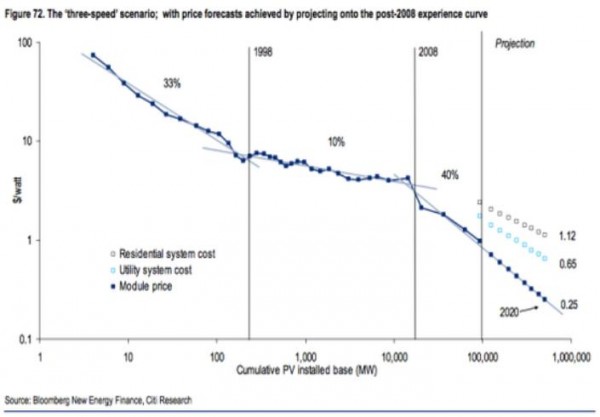 The average cost per watt of a solar panel may fall to $0.25 by 2020. The research is based on a variation of Moore’s law, which the Citigroup team calls “single speed.” The idea is that the price of solar panels will fall by 22 cents every time installed capacity doubles. The basic idea is that the cost of solar is expected to be cheaper than both natural gas and coal fire power plants by 2020. This also means that solar will become cheaper than crude oil.