Last week, Ben Bernanke announced to Congress that if recovery trends continue, the Federal Reserve will begin to taper its purchase of government-backed securities. When the Fed cuts back on purchases, interest rates will rise, and government securities will become more appealing. Investors will likely follow the higher yield, selling their positions in the stock market, and sending stocks into a slump.

Since 2008, the Fed has driven the 10-year note’s yield down to just 2.3%. While it’s no secret the Fed controls interest rates, many Americans picture Ben Bernanke in a back room, adjusting those rates with a lever. For now, Mr. Bernanke can only dream of a process that simple.

Boiled down, the Fed can either buy or sell government-backed securities to manipulate interest rates. Purchasing infuses the banking system with cash, lowering rates — a strategy called quantitative easing.

As the Fed eyes reducing its purchases the market will feel its effects. Here are four strategies that will see you through rocky times, and allow you to beat the Fed:

With interest rates near all-time lows, fixed-income investors turned to equities for a higher return. The movement manifested itself earlier this year, when fund manager David Einhorn urged Apple Inc. (NASDAQ:AAPL) to create preferred stock which would likely offer a dividend between 4% and 5%. Einhorn’s goal was for fixed-income funds to flock to the security and push its price up – leaving Einhorn with major profits.

But much to the chagrin of Einhorn and other yield-hungry investors, Apple Inc. (NASDAQ:AAPL) instead opted to raise its common stock dividend by 15% and spend $60 billion of its cash reserves on share repurchases.

Fixed-income investors are looking for one thing: yield. As Treasury rates rise, investors will follow the yield, selling their equity positions to buy lower-risk fixed-income securities. Low rates have created a dividend bubble. Get out before it bursts.

With the Fed’s tapering looming, I wouldn’t touch the SPDR Gold Trust (ETF) (NYSEMKT:GLD) nor iShares Silver Trust (ETF) (NYSEMKT:SLV) with a 10-foot pole. Metals serve as an inflation hedge and often strengthen when the dollar grows weak. So as interest rates increase, reductions in quantitative easing will strengthen the dollar, which I expect will drive down metal prices.

In order to adjust interest rates, the Fed needs money to buy government-backed securities. Where does the Fed get it from? Well, they print it — as much as is needed. Since 2007, it is estimated the Fed has “printed” more than $2 trillion.

As more dollars are created, supply increases, and the dollar loses purchasing power. A loss in purchasing power means a rise in the price of goods and services for consumers. This is inflation, and it’s the reason why the dollar struggled against the Euro, and other currencies.

Unlike currency, metals have inherent value. This makes them a great hedge against inflation. Investors took note, and in the period from the financial collapse until earlier this year, silver gained about 70%, while gold grew an impressive 80%.

When the Fed decides to taper, there will be no need to print new money (hopefully). The dollar will strengthen, investors will not need such a high hedge against inflation, and precious metals will fall.

Commodity holders are worried. Despite the Fed opting to continue buying bonds, talks of tapering purchases before the Fed’s meeting caused a 10% selloff in precious metals. I like gold and silver, but a 10% decline after rumors of tapering makes me wonder how much they will drop when such an event actually happens. 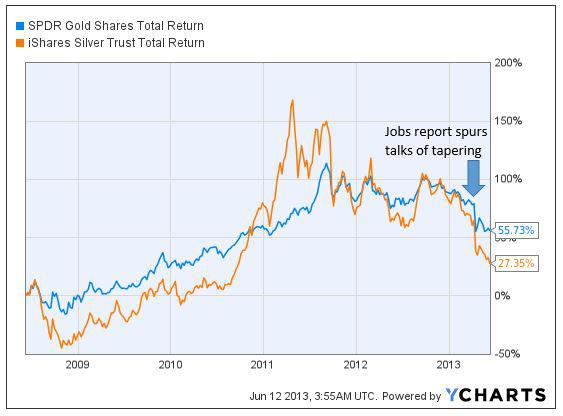 While dividend stocks will be hit hardest, the market as a whole will feel a selloff. It’s only a matter of months before the inevitable tapering starts. Every stock on the market will be affected in some way, but until tapering begins, why not hedge a downturn with a great defensive stock?

General Motors Company (GM): This Company Is the Phoenix of the Business World...