The fascinating aspect of the energy industry is how what may seem like a small event can have such a large impact on companies. Today, there’s one small trend that resulted in Exxon Mobil Corporation (NYSE:XOM) having a tragic quarter, while others like Devon Energy Corp (NYSE:DVN) crushed earnings estimates: the Brent-WTI spread. Let’s take a look at what the spread means, and who wins and loses as the spread narrows, as it has done in recent months.

The spread that isn’t set by Vegas
Contrary to what many may think, oil is not a universal product. Granted, the price for oil is much more global than its hydrocarbon counterpart natural gas, but there are some regional discrepancies in the price of oil. In the U.S., the two most important oil price benchmarks are the foreign Brent, and the domestic West Texas Intermediate — also known as WTI.

For several years until 2011, the spread between WTI and Brent was marginal, and the effects of pricing had little to no effect. Then, all of a sudden, U.S. oil production started to take off, and the cost for local crude became much less expensive than imported crude. 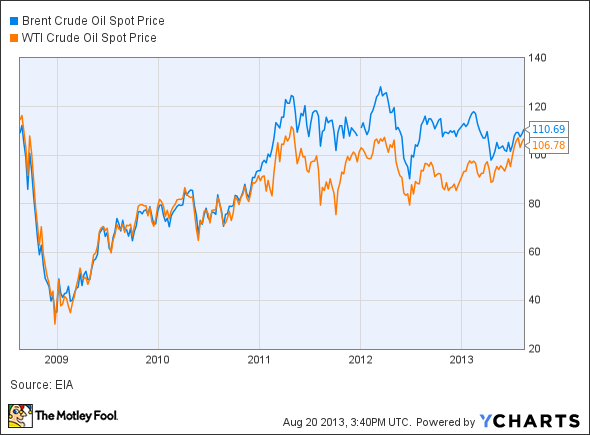 There are lots of reasons why this happened, but increased U.S. production, and a lack of infrastructure to move crude to markets, were the largest culprits of this trend. Today, though, increases in pipeline capacity, with the addition of rail shipments, has made the movement of oil across the country much more fluid, and the price of domestic crudes are increasing. At the same time, the price for international crude has slipped, thanks to the U.S. using less of it, as well as a weak economy in Europe and slowing growth in the Asia Pacific region.

What is important about this trend for investors, though, is the realized prices for oil each company can attain. A company like Exxon Mobil Corporation (NYSE:XOM), which has a greater exposure to international crude, will suffer in relation to more domestic-minded producers like Devon Energy Corp (NYSE:DVN). Compared to last quarter, Exxon Mobil Corporation (NYSE:XOM)’s upstream earnings took a $300-million hit thanks to lower realized prices on the crudes that it produced, whereas Devon Energy Corp (NYSE:DVN)’s increased production and higher-price realization on domestic crudes resulted in an earnings beat of almost 30%.

Who’s affected?
Both Devon Energy Corp (NYSE:DVN) and Exxon Mobil Corporation (NYSE:XOM) are clear examples of companies that benefit from the narrowing spread between regional oil prices, and we have seen several exploration and production companies adjust for this. ConocoPhillips (NYSE:COP) has been reshuffling its assets so that it has a much larger exposure to domestic oil production versus foreign crude. This past quarter, ConocoPhillips (NYSE:COP) increased production from the Permian, Bakken, and Eagle Ford formations by 47% year over year, and it has put assets in Nigeria, Trinidad and Tobago, and Canada this year alone.

But exploration and production companies are not the only ones that have been affected. The narrowing of the spread between WTI and Brent has meant that U.S. refiners are not getting the deep discounts on crude that they were seeing only a couple of quarters ago. The most directly affected are refiners in the Mid-continent region. CVR Refining saw its refining margin reduced by 29% year over year because the realized price it paid on crude feedstocks- — a majority of which are domesitcally priced — was 39% higher than it was last year.