Be forewarned: This article isn’t for the faint of heart. I’m going to be introducing three stocks that could make huge moves during this earnings season.

I’ve scoured the markets for the most popular shorted stocks four times before. Over this time frame, the average stock that I’ve covered has moved 15% on news of its earnings.

Here are this quarter’s three stocks to look out for:

If there’s one sector that’s simply been on fire the past two years, it’s 3-D printing. The technology has the potential to one day change the way we go about buying and making the things we use in everyday life. 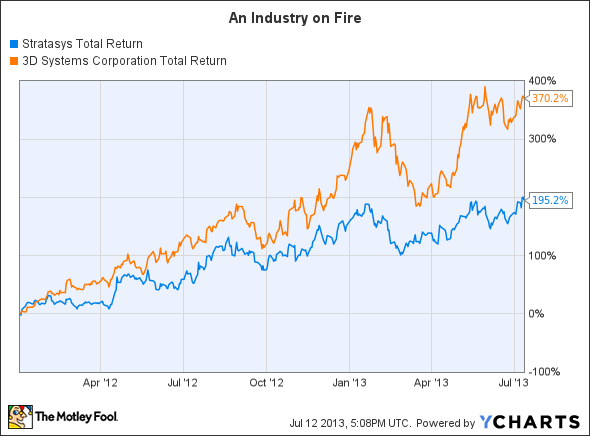 It really shouldn’t be that much of a surprise, then, that ExOne Co (NASDAQ:XONE) — which just became public this February — is already up more than 150%!

That alone has lots of shorts betting against the company. But that’s not all that ExOne Co (NASDAQ:XONE) bears are looking at. In the two quarters the company has announced earnings as a public company, it has brought in just over $20 million — yet it is valued at $900 million. By traditional metrics, that’s an insanely high valuation.

Yet, there’s more to the story. Within the 3-D printing industry, Stratasys, Ltd. (NASDAQ:SSYS) and 3D Systems Corporation (NYSE:DDD) have typically split up the market, with the former focusing on industrial clients, and the latter zeroing in on consumers. That changed recently, when Stratasys acquired consumer-facing Makerbot. But where, then, does ExOne Co (NASDAQ:XONE) fit?

Whereas 3D Systems Corporation (NYSE:DDD) and Stratasys, Ltd. (NASDAQ:SSYS) primarily offer printed products that can either function as prototypes or functional plastic objects, ExOne’s machines can print (read: manufacture) objects with steel, ceramics, sand, glass, and bronze — and the company is working on the capability to print with tungsten carbide, titanium, aluminum, and magnesium as well.

It will be interesting to see what ExOne has to report when it announces earnings.

This company — which makes at-home carbonators and syrups — and its stock have been shorted before, and the shorts have been burned. When Sodastream International Ltd (NASDAQ:SODA) announced earnings for the first quarter of 2013, it showed that revenue has grown by 36% per year for the past two years, while earnings have jumped 22% per year over the same time frame.

Some people think that the at-home carbonators are just a passing fad, and will never catch on over time — but they fail to realize that the machines have been popular in Europe for decades. Others are worried that the company will follow the path of Green Mountain Coffee Roasters Inc. (NASDAQ:GMCR) — whose stock suffered an implosion when patents on the Keruig coffee makers expired. But the two companies are fundamentally different.

Adding intrigue to the narrative is that there have been whispers that Sodastream International Ltd (NASDAQ:SODA) is now a buyout candidate. Whether that proves to be true, keep an eye out for whether SodaStream continues to penetrate the U.S. market as it has increased advertising here.

Dendreon Corporation (NASDAQ:DNDN)
Finally we have Dendreon, a biotechnology company focused on creating drugs to defeat various forms of cancer. There’s no doubt that any company that comes up with an effective treatment for cancer stands to make billions — but there’s a difference between potential and reality.