Is Exelon Corporation (NYSE:EXC) worth your attention right now? Investors who are in the know are buying. The number of bullish hedge fund bets inched up by 13 recently. Our calculations also showed that exc isn’t among the 30 most popular stocks among hedge funds.

In today’s marketplace there are dozens of metrics stock traders use to size up stocks. A couple of the most underrated metrics are hedge fund and insider trading moves. We have shown that, historically, those who follow the top picks of the top fund managers can outperform the broader indices by a superb margin (see the details here).

Heading into the fourth quarter of 2018, a total of 33 of the hedge funds tracked by Insider Monkey held long positions in this stock, a change of 65% from the second quarter of 2018. Below, you can check out the change in hedge fund sentiment towards EXC over the last 13 quarters. With hedgies’ positions undergoing their usual ebb and flow, there exists an “upper tier” of notable hedge fund managers who were increasing their holdings meaningfully (or already accumulated large positions). 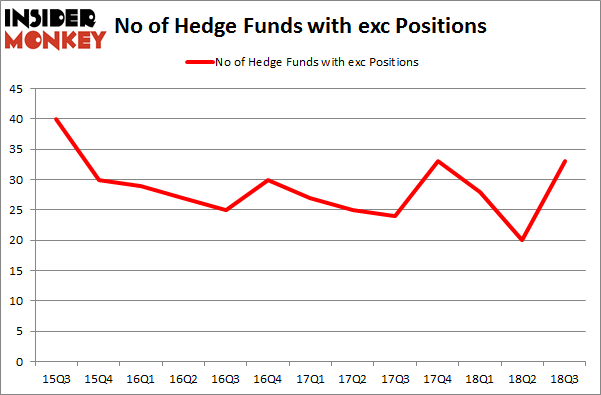 Among these funds, AQR Capital Management held the most valuable stake in Exelon Corporation (NYSE:EXC), which was worth $1022.3 million at the end of the third quarter. On the second spot was GLG Partners which amassed $266.4 million worth of shares. Moreover, Citadel Investment Group, Renaissance Technologies, and Electron Capital Partners were also bullish on Exelon Corporation (NYSE:EXC), allocating a large percentage of their portfolios to this stock.

With a general bullishness amongst the heavyweights, key hedge funds were leading the bulls’ herd. Citadel Investment Group, managed by Ken Griffin, established the most valuable position in Exelon Corporation (NYSE:EXC). Citadel Investment Group had $126 million invested in the company at the end of the quarter. Stuart J. Zimmer’s Zimmer Partners also made a $69.5 million investment in the stock during the quarter. The following funds were also among the new EXC investors: Clint Carlson’s Carlson Capital, Deepak Gulati’s Argentiere Capital, and D. E. Shaw’s D E Shaw.

As you can see these stocks had an average of 23.5 hedge funds with bullish positions and the average amount invested in these stocks was $1.01 billion. That figure was $2.04 billion in EXC’s case. The Progressive Corporation (NYSE:PGR) is the most popular stock in this table. On the other hand Banco Bilbao Vizcaya Argentaria SA (NYSE:BBVA) is the least popular one with only 6 bullish hedge fund positions. Exelon Corporation (NYSE:EXC) is not the most popular stock in this group but hedge fund interest is still above average. This is a slightly positive signal but we’d rather spend our time researching stocks that hedge funds are piling on. In this regard PGR might be a better candidate to consider a long position.