First-quarter earnings are pouring in, and there are plenty of lessons to be learned from this quarter’s results. Let’s look at a few reports, identify common trends, and decide whether dividend stocks will soar or stumble in the quarters ahead.

Did Exelon Corporation (NYSE:EXC) excel?
Exelon reported earnings Thursday, beating both top- and bottom-line expectations. Even with major gains across the board, a cursory look at Exelon’s earnings left investors wanting more. Merger synergies didn’t meet their expected mark, and misjudged hedges pushed the company to take a $235 million one-time hit. But its hedged position also hints at profit potential in the months ahead. As natural gas prices head higher, the nuclear-centric utility is poised for increasing cost competitiveness. The dividend stock is up 18% over the last quarter, and favorable energy prices could present the utility with even more upside in the months ahead.

But unlike Exelon Corporation (NYSE:EXC), its regulated utilities make up 81% of the company’s overall sales. Tampa Electric relies on natural gas for essentially all of its remaining capacity, and the company’s Peoples Gas subsidiary was a major moneymaker this past quarter. That means that any gains for coal will be deadened by natural gas’ diminished competitiveness in the months ahead. And regardless of energy portfolios, TECO Energy, Inc. (NYSE:TE)’s earnings aren’t going anywhere if its April rate request isn’t approved.

Duke makes the most of its merger
Duke Energy Corp (NYSE:DUK) reported earnings Friday, surpassing sales expectations but bottoming out on bottom-line earnings. The utility took major hits within its coal and gas commercial generation businesses, but it managed to make up for losses with strong earnings on its regulated front.

Investors were watching this quarter’s results especially closely for signs of synergies from the utility’s July 2012 Progress Energy merger. Q1 sales signal that the partnership has proved effective, and Duke Energy Corp (NYSE:DUK)’s merger moves remain on track from an operational standpoint.

The company isn’t immune from natural gas price spikes, but its diversity will help offset any gas losses with gains from its nuclear, coal, and renewable assets. Some other utilities might not fare as well. While Duke Energy Corp (NYSE:DUK) relies on natural gas and oil for 37% of its capacity, Atlantic Power Corp (NYSE:AT) has dug into its gas gamble with 58% capacity and plans to invest more in the coming quarters.

Dividend stocks for the win?
Over the past week, utility stocks have stumbled, although Duke Energy Corp (NYSE:DUK) and TECO Energy, Inc. (NYSE:TE) remain above the industry’s average return rate. 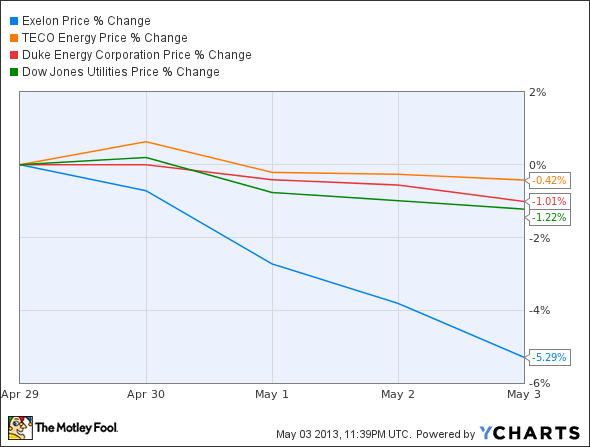 But 2013 has proved profitable for these dividend stocks. Exelon Corporation (NYSE:EXC) is up 20.3%, while TECO Energy, Inc. (NYSE:TE)’s relative lag still leaves it with 13% gains.