It is easy to forget the innovative role that the military has played in modern life. America’s DARPA sponsored APRANET was one of the precursors of the internet. The modern rocket industry has its base in technological evolutions of World War II. Now, the U.S. Army is continuing the military’s tradition of supporting innovation. It recently published a list of of renewable energy partners to help it develop its geothermal resources. 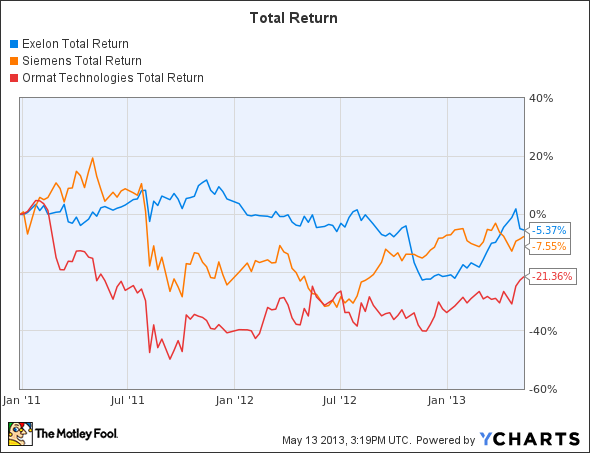 Companies Involved in the Initial Round of Army Contracts

Constellation NewEnergy was recently bought up by Exelon Corporation (NYSE:EXC) and brought into its diverse operations. The utility is known as one of the cleaner utilities with a number of nuclear power plants. It has pushed hard to get into the renewable energy business, and its interests in geothermal play along this trend.

Financially the company is somewhat questionable. Nuclear plants are not especially cheap and this has forced Exelon Corporation (NYSE:EXC)’s margins and return on investment (ROI) below that of many of its competitors. With a five-year earnings per share (EPS) growth rate of -17.01% the company was forced to cut its dividend. This has occurred while many of its competitors are enjoying cheap American coal. With expected 2014 earnings per share (EPS) of $2.34 and stock price around $35, Exelon Corporation (NYSE:EXC) is too expensive for the time being.

Siemens AG (ADR) (NYSE:SI) is an enormous conglomerate with interests throughout the energy sector. Based on recent second quarter, 2013 data, in its Energy division only its power transmission business saw revenue growth relative to last year. The company originally hails from Germany. Europe’s sovereign debt issues continue to affect Siemens AG (ADR) (NYSE:SI) as governments are not inclined to speed billions on infrastructure upgrades when they find it difficult to issue new debt.

Geothermal energy is not a main focus of Siemens, but it fits nicely into the company’s focus on electrical and energy products. As an investment Siemens is a mixed bag. GE is a comparable conglomerate and Siemens AG (ADR) (NYSE:SI)‘s profit margin of 5.7% and earnings before interest and taxes (EBIT) of 10.8% are below GE’s figures. On the bright side, Siemens has a higher ROI of 9.7%.

Other Companies in the Geothermal Market 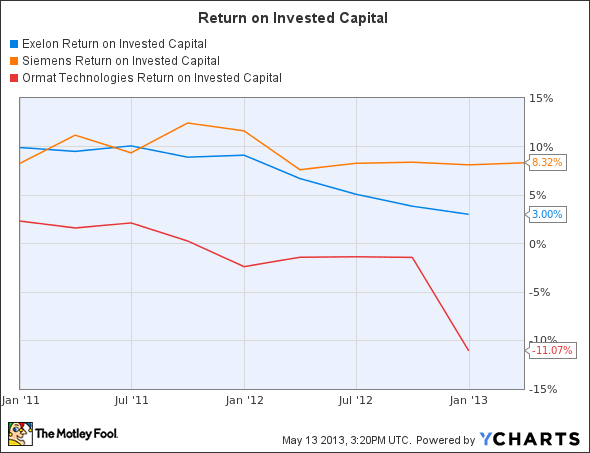 Ormat Technologies, Inc. (NYSE:ORA) is a small fish in the big utility sea. It is a great way to invest directly in geothermal. The company owns a number of geothermal plants and recovered energy generation facilities throughout the world. Even the U.S. Army recognizes that geothermal plants can be very profitable as the operator does not have to pay for fuel inputs.