Exelon Corporation (EXC): Can You Still Trust This Dividend Stock?

Exelon Corporation (NYSE:EXC) reported earnings yesterday, beating top-line estimates, but just missing the mark on profit. With plummeting power prices, and a rapidly changing energy world, investors need to know if Exelon can still cut it in quarters to come. Here’s what you need to know.

Exelon Corporation (NYSE:EXC)’s Q2 sales clocked in at $5.88 billion, a solid $120 million above Mr. Market’s estimates for the utility. With GAAP earnings up a seasonally adjusted 3.1%, it seems that the utility’s merger with Constellation Energy last year might finally be paying off.

But even as Exelon Corporation (NYSE:EXC) expanded its top line, the company missed slightly on bottom-line estimates. Adjusted EPS clocked in at $0.53, $0.01 below analyst estimates, and 13% below Q2 2012’s Non-GAAP EPS.

Looking back over the past five years, sales have increased 31.5%, while adjusted EPS has tumbled 72% (with nearly 100% of the profit drop occurring in the last year). 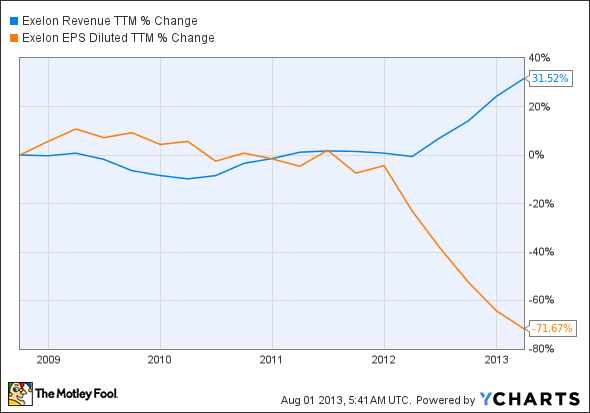 Exelon Corporation (NYSE:EXC) stock fell 2.8% yesterday, which was most likely due to the realization that low power prices are having a significant effect on this utility’s earnings. Around 65% of Exelon’s generation fleet relies on PJM auctions, and its coal markets took a major hit last quarter. The utility announced additional $350 million and $400 million reductions off its 2014 and 2015 sales as electricity stays cheap. While prices are out of the utility’s control, diversification of risk is an important element to consider.

Another big question moving forward is whether Exelon Corporation (NYSE:EXC) can continue to cut costs as its squeezes economies of scale out of its Constellation merger. According to its latest report, Exelon is on track to snag $550 million in synergy savings by 2014, and expects to keep saving that same amount annually.

At 3.9%, Exelon’s dividend is an attraction for most income investors. The company recently cut its distribution 40%, clearing up capital to invest and grow elsewhere, “even when prices move against us,” noted CEO Chris Cane during the earnings call. Shareholders shouldn’t be worried about another cut anytime soon, but pure dividend investors with low risk tolerance should take a look at some other players, as well. With a 4.7% annual yield, PPL Corporation (NYSE:PPL)‘s British-American split gives it geographic diversity, and it continues to set itself up for smooth regulatory waters, with a recently submitted eight-year power plan. 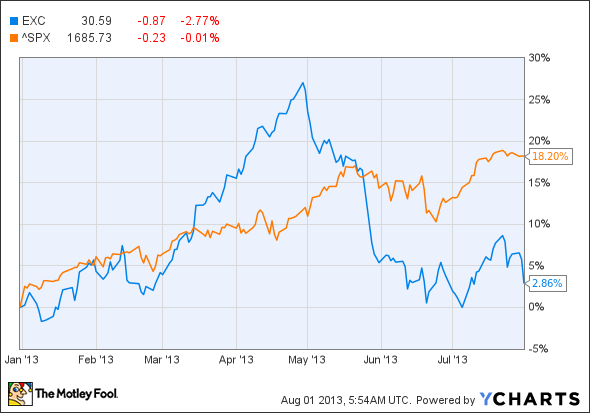 But now more than ever before, tough times ahead are built in to Exelon stock prices. With a solid dividend and stable business model, Exelon stock remains a value buy for any income investor. If this quarter is any evidence, rocky power prices will affect this nuclear-centric deregulated utility more than many of its competitors — but for those patient enough to wait, an (eventual) economic recovery could reward Exelon stock investors handsomely.

The article Can You Still Trust This Dividend Stock? originally appeared on Fool.com and is written by Justin Loiseau.

Fool contributor Justin Loiseau has no position in any stocks mentioned, but he does use electricity. You can follow him on Twitter, @TMFJLo, and on Motley Fool CAPS, @TMFJLo.The Motley Fool recommends Exelon.