Ok folks, as I’ve been getting a few questions on Apple Inc. (NASDAQ:AAPL) it’s easier to answer them in one post, and in fairly condensed fashion, as they all come around to the same theme.

The main one is simple — What the heck is “wrong” with AAPL?

To this I must say I just don’t agree with this perspective. As someone who can remember distinct purchases of the stock myself in the $50’s (July 2006), the $70’s (on iPhone announcement), the $120’s after a monster good quarter in 2009, and I could name a lot more examples at lower and higher prices, I just think many people have lost perspective. How can a stock that has gone from $50 to $540 in 6 years be acting that “wrong” on a 20% drop after a what, 1000% rise?

Frankly, given the rise of Android, I’m surprised we haven’t seen this sort of a drop sooner than this year. In effect, I’ve written a lot of “potential warnings” on this name and favored Google Inc (NASDAQ:GOOG) and have been early. I will still say that I favor GOOG over AAPL longer term, but I do think the next 50-100 points in the short to intermediate term will happen for AAPL. In fact, we have just seen such a move when AAPL burst from my $512-516 level into the $580’s. I wouldn’t be shocked to see another 50-100 upside move in the AAPL.

So I’d ask not what is wrong with Apple Inc. (NASDAQ:AAPL), but simply what is causing the downside — ie., the real reasons?

So much has been discussed about early tax gain selling. Ok, I’ll agree with this to only a minor degree. As usual, I don’t agree with the masses and think the answer is more structural and largely twofold, though I add a bonus or two.

1) First the big money got to a point where they owned Tech by just owning AAPL. This was just wrong, couldn’t last, and is now being unwound. As we see developments on budgets from AT&T Inc. (NYSE:T), T-Mobile, and Sprint Nextel Corporation (NYSE:S) among others we will see the bandwidth arms dealers see some money come back into them. As we see Cloud proliferation continue, the Cloud merchants will see buying. As we see intense deep value come into the Wintel space, we will see money come back into them. This all is quite healthy. I could add other sub-sectors, but you all get the point.

2) Apple Inc. (NASDAQ:AAPL) became just too big an allocation in the indices and the eventual decrease by the indices is being preemptively sold by the funds. To be precise, I believe we are about to see a fairly substantial decrease in the 20% weight in the QQQ, as well as its weight in the Nasdaq and the S&P 500. I’ve seen no announcement of such, but I think this is a pretty easy prediction to make. I have been critical of the Nasdaq for not reducing the AAPL weighting already. To me, the move to reduce the weighting is overdue, but it will surely come. 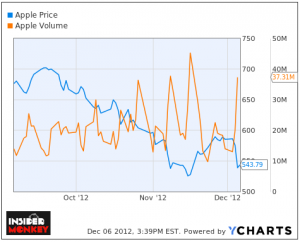 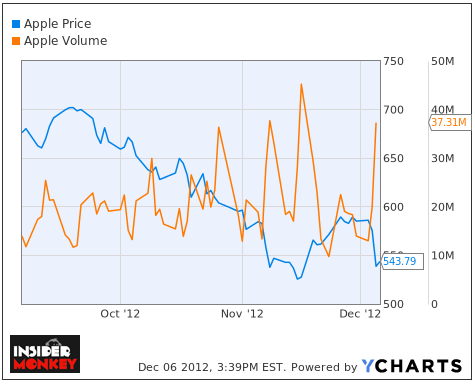 After Changing Its Facebook Inc (FB) Deal, Does Zynga Have a 30% Downside?