Everbridge Inc. (EVBG) Could See Upward Move With The Expiration Of The Quiet Period

The IPO Quiet Period for recent IPO Everbridge Inc. (NASDAQ:EVBG) will come to an end on October 10. Right now, investors have an opportunity to get long ahead of the quiet period expiration and to later sell shares once EVBG’s underwriters release detailed reports on October 11th.

When the quiet period expires on October 10, the  firm’s IPO underwriters will be allowed to publish reports and recommendations of the company on October 11. For the reasons detailed below, I believe that these reports will be positive and that they will boost Everbridge’s share price.

Given EVGB’s early success on the market, strong, prolific underwriters and solid fundamentals, I see shares of EVBG as an attractive buying opportunity for short-term investors. 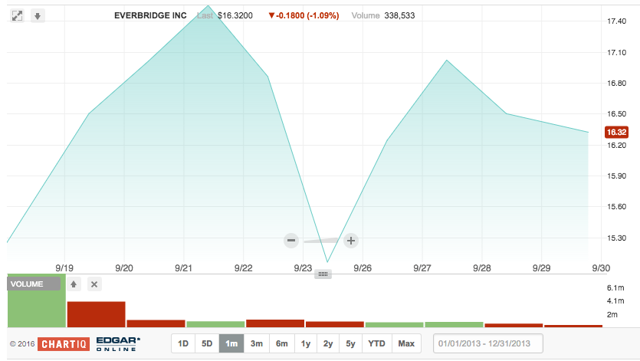 Everbridge Inc. (NASDAQ:EVBG) is a software company that offers communication and safety applications, designed to perform during critical events. Its SaaS-based platform enables its clients to deliver messages to large groups of people during times, such as terrorist attacks or severe weather conditions. These are able to be sent in near-real time to over 100 different types of communication devices, across more than 200 countries and in 15 languages simultaneously. In 2015, Everbridge handled 1.1 billion communications.

In its SEC filings, the company noted the increasing need for preparedness and public safety from a wide variety of critical incidents including active public shooters, IT outages, cyber attacks, and other events. This increase has driven the marketplace to provide secure, scalable and reliable notification systems, especially systems that can communicate over mobile devices. Everbridge also notes that the market for critical communications solutions is expected to grow from $15.6 billion in 2015 to $31.9 billion in 2020.

The IPO quiet period is a period of time after a company’s IPO in which underwriters are not allowed to release research reports on the company. This is based on SEC guidelines. Current research has found a significant potential for above-market returns in the five days prior to and two days after the conclusion of a company’s quiet period.

Everbridge Inc. (NASDAQ:EVBG)’s IPO underwriters could positively influence the stock’s recent growth through the release of detailed positive reports highlighting its strong performance. As noted above, our research has found above-market returns; particularly for firms with powerful global underwriters like those backing the EVBG IPO.

Given Everbridge’s initial success as a public company, its burgeoning industry, and attractive valuation, we expect more good news from the firm’s underwriters after 10/10; this catalyst presents a strong opportunity to buy the firm’s stock before the event.

Disclosure: I am/we are long EVBG.