Offshore drilling in the arctic has received a host of negative press. Governments have been prompted to reexamine firms’ operations, and environmental groups continue to raise their voices in protest against drillers. In the modern, technologically-oriented world, a first-mover advantage is seen as a great source power and profits. Recent difficulties show that investing after a dip has proved profitable, and can be a better approach.

Why is There Pressure to Drill in the Arctic?

The world’s energy companies see the impact of resource constraints on a daily basis. The world continues to heat up, and this will cause the melting of the ice caps. There is the idea that if a company is not the first to open up the arctic then other companies will gain the majority of new reserves. The replacement of reserves is a critical figure that investors watch, and upstream companies that are unable to replace reserves face decreased production volumes, decreased cash flow, and investor wrath. 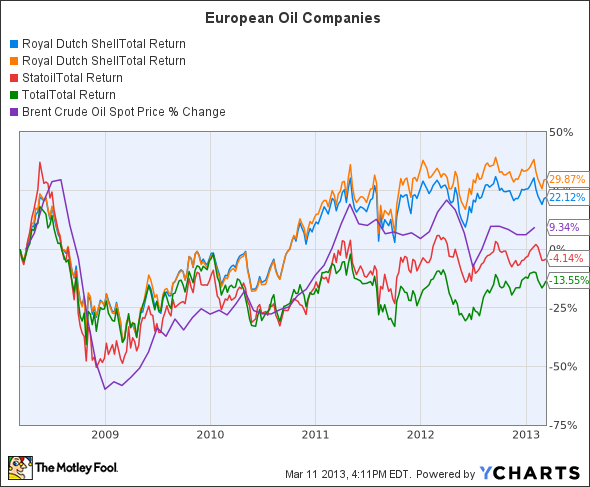 Royal Dutch Shell plc (ADR) (NYSE:RDS.A) is the most visible player in the arctic. The conditions in the arctic are strenuous, and the lack of infrastructure would multiply the impact of any accident. Recent tests of Shell’s safety equipment show that the technology leaves much to be desired. Shell’s drilling rigs have faced a number of failures, even after the firm has sunk more than $4 billion into the operation.

Shell has a number of redeeming qualities. It is highly involved with the world’s growing LNG market. In Canad, it is involved in an LNG export facility in Kitimat that will serve energy-hungry Asian economies. Additionally, the firm has interests in a number of offshore fields, and aims to increase production from 3.3 million barrels of oil equivalent per day in 2012 to approximately 4.0 million barrel of oil equivalent per day in 2017 or 2018.

The company is not overloaded with debt, as its total debt to equity ratio is just 0.20. Its return on investment of 12.5% is acceptable, but less than half that of Exxon Mobil Corporation (NYSE:XOM). If U.S. investors really want to invest in the arctic then the class B Royal Dutch Shell plc (ADR) (NYSE:RDS.A) shares offer a greater tax advantages than the Class A shares.

Statoil ASA (ADR) (NYSE:STO) has interests in the arctic, but after seeing Shell’s difficulties it is taking a more conservative approach. The firm’s Norwegian home and experience drilling in the Northern reaches of the world should provide it an advantage in arctic drilling, but it appears more prudent to focus on its other assets. Between Tanzania, the Gulf of Mexico, and Newfoundland, it has a number of promising fields.