If you happen to be a huge market nerd who keeps close track of SEC filings, you probably know Markel Corporation (NYSE:MKL)  recently released its latest equity holdings with its latest 13F filing.

Yesterday, I already spent some time digesting of few of the promising additions to this up-and-coming financial holding company’s portfolio.

Now we’re going to take a look at some of the most significant stock sales completed last quarter by Markel Corporation (NYSE:MKL) President and CIO Tom Gayner.

As it stands, four companies in particular suffered the brunt of Markel Corporation (NYSE:MKL)’s selling: 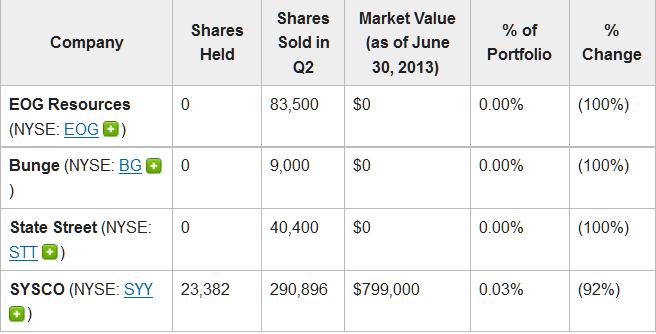 As an aside, astute investors might also notice Markel Corporation (NYSE:MKL)’s nearly 3 million-share stake in Artio Global Investors Inc. (NYSE:ART) no longer exists in the most recent filing, but that’s because the investment firm was acquired by Scotland-based Aberdeen Asset Management through an agreement originally announced in February, then completed in May.

First, that Gayner closed his position in agribusiness specialist Bunge Ltd (NYSE:BG) shouldn’t come as a big surprise. After all, the stake was relatively small (worth less than $700,000 at today’s prices), which makes it seem more likely that Gayner was simply putting out the feelers in an effort to keep track of its prospects. That said, Gayner also sold nearly all of Markel Corporation (NYSE:MKL)’s sizable position in fellow food service company SYSCO Corporation (NYSE:SYY) last quarter — for those of you keeping track, that chunk of shares would have been worth roughly $10 million based on last quarter’s range between $33.30 and $36.05 per share.

Next, it’s also curious that Gayner sold all of Markel’s shares in oil and natural gas specialist EOG Resources Inc (NYSE:EOG) last quarter, especially when he not only just opened new positions in ONEOK, Inc. (NYSE:OKE), Synalloy Corporation (NASDAQ:SYNL), and Chevron Corporation (NYSE:CVX) in Q2, but also boosted his already-significant stake in National-Oilwell Varco, Inc. (NYSE:NOV) by 40%. While we can’t be entirely sure exactly when Gayner sold EOG Resources Inc (NYSE:EOG); looking at its chart over the past few months show us the company was likely trading near 52-week highs when it happened, leaving Gayner to take profits and put the money to work in what he believed were more promising bets.

Next, Gayner also dumped his entire stake in fellow financial holding company State Street Corporation (NYSE:STT), which also managed to set multiple new 52-week highs during the second quarter. So, what might he have purchased in its place? Considering Markel’s State Street Corporation (NYSE:STT) stake would have been worth between $2.3 and $2.8 million given its price per share ranging from $56.50 and $67.44 in Q2, my bet would be that money helped him open Markel’s new $2.46 million position in private equity firm The Blackstone Group L.P. (NYSE:BX).

Once again, this doesn’t mean you should immediately follow suit and sell all four companies listed in the table above. To the contrary, these stocks could be perfectly acceptable investments in their own right, but they simply didn’t find a place in Markel’s enormous portfolio.