The United States Geological Survey recently reviewed earlier studies of the Bakken and Three Forks formations. Three Forks is below the Bakken formation and continued improvements in fracking are opening up these harder to reach areas. The latest government findings have a mean estimated resource of 7.4 billion barrels (BBO) of undiscovered and technically recoverable oil; a serious boost from the earlier 2008 estimate of 3.65 BBO. With such a substantial boost, some companies are looking to hit the jackpot. 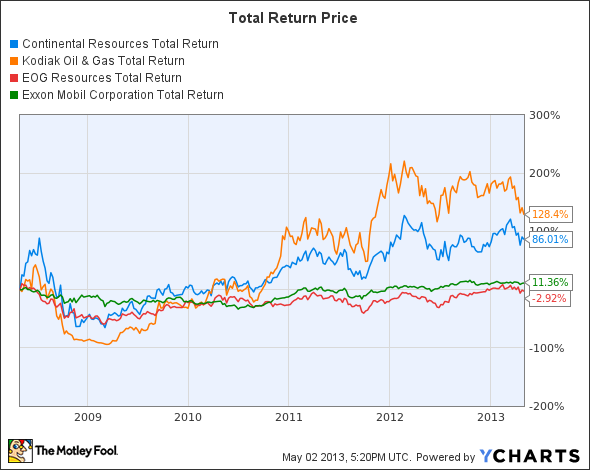 Which companies will benefit?

Coupled with other developments like the South Central Oklahoma Oil Province (SCOOP), Continental Resources, Inc. (NYSE:CLR) hopes to boost production from 98 thousand barrels of oil equivalent per day (MBoepd) in 2012 to 300 MBoepd in 2017. One downside is the firm’s total debt to equity ratio of 1.12, but if it is able to boost production then it should be fine. Its return on investment (ROI) of 11.0%, gross margin of 89.5% and earnings before interest and taxes (EBIT) margin of 53.6% make it one of America’s most profitable upstream producers.

Kodiak Oil & Gas Corp (USA) (NYSE:KOG) has been active in the Middle Bakken and Three Forks region since 2006. It’s a great Bakken play and a prospective takeover target. With the growth in the Three Forks formation it only becomes more attractive to an oil major looking to replace its reserves. Kodiak Oil & Gas Corp (USA) (NYSE:KOG) is hoping to produce 29 MBoepd to 31 MBoepd in 2013; a step below Continental Resources, Inc. (NYSE:CLR), but a respectable production level nevertheless. Its proven reserves are around 85% crude oil and 15% natural gas.

Its total debt to equity ratio of 1.06 is somewhat high, but its margins are healthy. Its gross margin of 79.7% and EBIT margin of 38.8% show the benefit of drilling for crude relativity close to American refineries. Its ROI of 6.2% could be higher, but it is still a profitability growing Bakken and Three Forks play.

EOG Resources Inc (NYSE:EOG) isn’t ignoring growth. It hopes to expand 2013 crude oil production by 28%. EOG Resources is the largest horizontal crude producer in the U.S. by a substantial margin. It has significant interests in the Bakken and Three Forks formations. Its latest Antelope expansion covers both formations and produces 78% crude oil, 11% natural gas liquids (NGLs) and 11% natural gas. The percentage of crude oil production could be higher, but regardless it provides a good hedge against low natural gas prices.

The firm is hoping to make first production in the East Irish Sea by Q4, 2013. Together with development in the Texan Eagle Ford formation, EOG Resources Inc (NYSE:EOG) is on its path to meet its production target for 2013. The company’s debt load is healthy with a total debt-to-equity ratio of 0.48. Its gross margin of 83.2% is comparable to that of its competitors, but its ROI of 3.0% and EBIT margin of 13.2% are very low. These numbers are impacted by recent write-downs of Canadian natural gas reserves. In the next fiscal year the firm’s margins should return to healthier levels.