Envestnet Inc (ENV): Are Hedge Funds Right About This Stock?

As we already know from media reports and hedge fund investor letters, many hedge funds lost money in October, blaming macroeconomic conditions and unpredictable events that hit several sectors, with healthcare among them. Nevertheless, most investors decided to stick to their bullish theses and their long-term focus allows us to profit from the recent declines. In particular, let’s take a look at what hedge funds think about Envestnet Inc (NYSE:ENV) in this article.

Envestnet Inc (NYSE:ENV) shares haven’t seen a lot of action during the third quarter. Overall, hedge fund sentiment was unchanged. The stock was in 13 hedge funds’ portfolios at the end of September. At the end of this article we will also compare ENV to other stocks including Banco Macro SA (NYSE:BMA), SeaWorld Entertainment Inc (NYSE:SEAS), and Diamond Offshore Drilling Inc (NYSE:DO) to get a better sense of its popularity.

At Q3’s end, a total of 13 of the hedge funds tracked by Insider Monkey were long this stock, no change from one quarter earlier. Below, you can check out the change in hedge fund sentiment towards ENV over the last 13 quarters. With hedgies’ positions undergoing their usual ebb and flow, there exists a few noteworthy hedge fund managers who were boosting their stakes substantially (or already accumulated large positions). 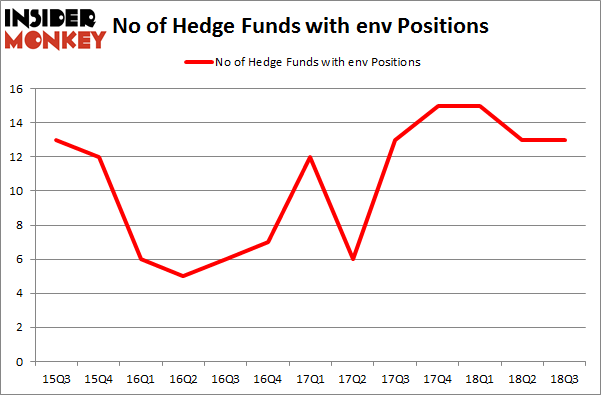 Among these funds, Echo Street Capital Management held the most valuable stake in Envestnet Inc (NYSE:ENV), which was worth $17.9 million at the end of the third quarter. On the second spot was Impax Asset Management which amassed $16.8 million worth of shares. Moreover, Millennium Management, Whetstone Capital Advisors, and Renaissance Technologies were also bullish on Envestnet Inc (NYSE:ENV), allocating a large percentage of their portfolios to this stock.

Judging by the fact that Envestnet Inc (NYSE:ENV) has faced declining sentiment from hedge fund managers, we can see that there was a specific group of money managers who were dropping their full holdings heading into Q3. Interestingly, Ken Griffin’s Citadel Investment Group cut the biggest position of the “upper crust” of funds watched by Insider Monkey, totaling close to $21.6 million in stock. Nick Niell’s fund, Arrowgrass Capital Partners, also dumped its stock, about $0.7 million worth. These transactions are interesting, as total hedge fund interest stayed the same (this is a bearish signal in our experience).

As you can see these stocks had an average of 18 hedge funds with bullish positions and the average amount invested in these stocks was $193 million. That figure was $71 million in ENV’s case. SeaWorld Entertainment Inc (NYSE:SEAS) is the most popular stock in this table. On the other hand Banco Macro SA (NYSE:BMA) is the least popular one with only 12 bullish hedge fund positions. Envestnet Inc (NYSE:ENV) is not the least popular stock in this group but hedge fund interest is still below average. This is a slightly negative signal and we’d rather spend our time researching stocks that hedge funds are piling on. In this regard SEAS might be a better candidate to consider a long position.