Yesterday, as I was perusing the Yahoo! Finance feeds, I came across an interesting headline: “Cramer Talks MLP Craze“. I clicked it, Fools, and I was appalled. At the same time, I was impressed! Who knew that it was possible to cram so much disastrous advice into a two-and-a-half-minute segment?

To be fair, it was Jim Cramer’s fast-talking guest Dan Dicker who dispensed most of the statements about MLPs that I’ll refute today, including his main point: that you should buy MLP IPOs merely because they are MLPs having IPOs. Let’s get started.

“The tax-advantaged position … only works in a very low-interest environment.”
Dicker is trying to imply that investors are chasing yield with MLPs because they can’t get it anywhere else, given these low-interest times we’re in. There is a notion that MLPs have a hard and fast correlation to interest rates because of this behavior. It is an incorrect notion. From a 2010 Wells Fargo Equity Research paper: “While sudden spikes in interest rates have caused declines in MLP price performance, there has been only a 0.27 correlation between MLP price performance and the 10-year Treasury over the past five years.”

We can see this visually with the chart below, which compares the performance of Enterprise Products Partners L.P. (NYSE:EPD) and the U.S. Real Interest Rate from 2005 through 2010: 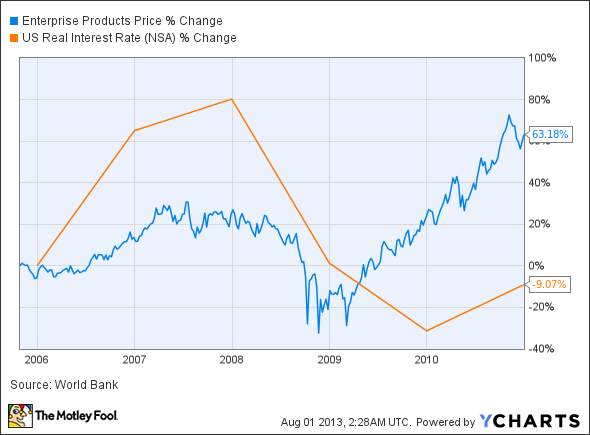 Enterprise Products Partners L.P. (NYSE:EPD) units continued to climb, regardless of what was going on with interest rates. So much for that theory. Plenty more words of wisdom from Dicker though, so let’s move on.

“Look for fresh ones.”
Unlike, say, a carton of milk, MLPs do not have an expiration date. Buying a security solely because it’s new implies that last week’s MLP IPOs, Phillips 66 Partners and Marlin Midstream Partners LP (NASDAQ:FISH), are the same investments with the same opportunities. They are not.

By the way, these “fresh” MLPs that pop after the IPO? They yield next to nothing. Phillips 66 Partners debuted with the lowest yield for an MLP at IPO ever. After the run-up, the partnership is sporting a yield of less than 2%, which is absolutely unheard of in this space. All of those “yield hungry” investors that Dicker was encouraging to chase these IPOs will wind up sorely disappointed when yields plummet shortly thereafter.

“It’s the mature ones that you can actually stay away from now.”
Don’t tell Buckeye Partners, L.P. (NYSE:BPL) no one wants the old MLPs anymore. Debuting on Dec. 16, 1986, it’s the oldest MLP on the market. It also happens to be up more than 55% year to date. There are only three MLPs in the entire energy space that are outperforming Buckeye Partners, L.P. (NYSE:BPL) this year. Aging like a fine red wine, it serves as a reminder that investors can profit from mature MLPs.