The story of Seadrill Ltd (NYSE:SDRL) has been a bit of a rosy one for the past several years. It has emerged as a darling of service companies as its fleet of ultra-deepwater capable assets has one of the best safety and operational performance records. This, plus its rapidly expanding fleet of high performance rigs has led to exceptional growth over the past few years, but it has come at the cost of taking on a sizable debt load. Can the company’s growth keep pace with it’s debt load? Let’s take a look at what’s coming down the pipe for Seadrill Ltd (NYSE:SDRL) to see if it has the legs.

Growth comes at a cost 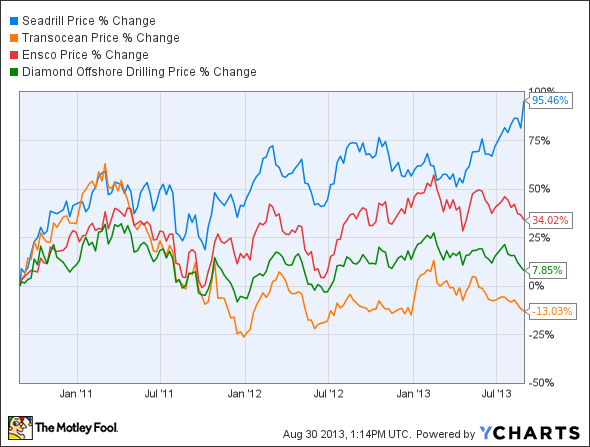 There is one thing that separates Seadrill Ltd (NYSE:SDRL) from its competitors, the age and the technical specifications of its fleet. The average age of its floating assets–which are either semisubmersible rigs or drillships– is less than half of its next competitor ENSCO PLC (NYSE:ESV). These two elements mean two critical things to Seadrill Ltd (NYSE:SDRL)’s success, the company can charge a premium for its rigs, and the company has much less downtime for repairs and turnarounds. At the same time, the company is undertaking a rather ambitious growth plan. Seadrill has plans in place to almost double the size of its fleet by 2016. To make much of this happen, the company has taken on a sizable debt load. Seadrill Ltd (NYSE:SDRL)’s current debt load stands at 61.5%, another metric where the company stands out from its peers.

Sometimes, the type of debt is just as important than the actual debt load. In the case of Seadrill, this isn’t as encouraging either. Of that $10 billion outstanding, $4.4 billion of it is due before year end 2015. This could potentially disrupt its expansion plans as it finances its debt obligations.

Tackling the debt
Then again, the size of that debt obligation could be mitigated if the company is able to grow fast enough. This appears to be the company’s plan. The addition of those 27 jack-ups, semi-submersibles, and drillships is expected to almost double the company’s current EBITDA to $4.5 billion by 2016. More importantly, almost 30% of those new rigs will be coming online by the end of this year. With an order backlog of about $19 billion on the books, Seadrill Ltd (NYSE:SDRL) will be able to put those assets to work immediately.