Ennis, Inc. (EBF): Are Hedge Funds Right About This Stock?

We have been waiting for this for a year and finally the third quarter ended up showing a nice bump in the performance of small-cap stocks. Both the S&P 500 and Russell 2000 were up since the end of the second quarter, but small-cap stocks outperformed the large-cap stocks by double digits. This is important for hedge funds, which are big supporters of small-cap stocks, because their investors started pulling some of their capital out due to poor recent performance. It is very likely that equity hedge funds will deliver better risk adjusted returns in the second half of this year. In this article we are going to look at how this recent market trend affected the sentiment of hedge funds towards Ennis, Inc. (NYSE:EBF), and what that likely means for the prospects of the company and its stock.

Ennis, Inc. (NYSE:EBF) shares didn’t see a lot of action during the third quarter. Overall, hedge fund sentiment was unchanged. The stock was in 13 hedge funds’ portfolios at the end of the third quarter of 2016. At the end of this article we will also compare EBF to other stocks including AG Mortgage Investment Trust Inc (NYSE:MITT), Omeros Corporation (NASDAQ:OMER), and Heritage Insurance Holdings Inc (NYSE:HRTG) to get a better sense of its popularity.

What does the smart money think about Ennis, Inc. (NYSE:EBF)? 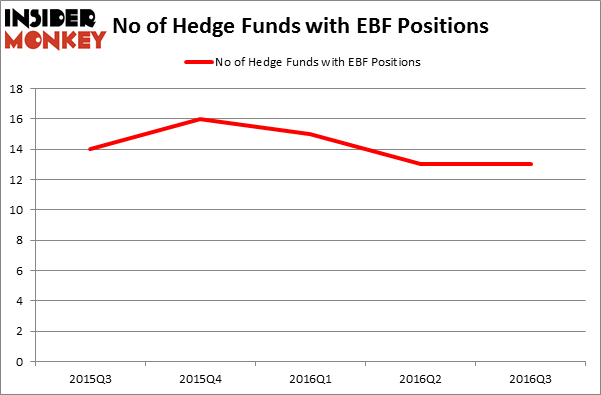 Of the funds tracked by Insider Monkey, Cliff Asness of AQR Capital Management holds the biggest position in Ennis, Inc. (NYSE:EBF). AQR Capital Management has a $14.4 million position in the stock. On AQR Capital Management’s heels is Renaissance Technologies, one of the biggest hedge funds in the world, which holds a $12.2 million position. Other peers that are bullish consist of John Overdeck and David Siegel’s Two Sigma Advisors, D. E. Shaw’s D E Shaw and Chuck Royce’s Royce & Associates. We should note that none of these hedge funds are among our list of the 100 best performing hedge funds which is based on the performance of their 13F long positions in non-microcap stocks.

Is B2Gold Corp (BTG) A Good Stock To Buy?
Monthly Newsletter Strategy
Download a free copy of our newsletter and see the details inside!
Hedge Fund Resource Center
Related News
The Chairmen of 4 Companies Unload Shares, Plus Insider Buying at Lions Gate (LGF) Delta Air Lines Inc. (DAL) CEO Sells Massive Amount of Shares, Plus a Look at 2 Other Companies with Insider Selling Looking For An Unheralded Stock to Buy? Algert Coldiron Investors Shares 5 11 Best Science YouTube Channels To Watch 10 Most Famous Cubist Paintings 5 Countries That Have the Most Drones
Billionaire Hedge Funds