How do we determine whether Enel Americas S.A. (NYSE:ENIA) makes for a good investment at the moment? We analyze the sentiment of a select group of the very best investors in the world, who spend immense amounts of time and resources studying companies. They may not always be right (no one is), but data shows that their consensus long positions have historically outperformed the market when we adjust for known risk factors.

Hedge fund interest in Enel Americas S.A. (NYSE:ENIA) shares was flat at the end of last quarter. This is usually a negative indicator. At the end of this article we will also compare ENIA to other stocks including Pearson PLC (NYSE:PSO), NVR, Inc. (NYSE:NVR), and Bausch Health Companies (NYSE:BHC) to get a better sense of its popularity.

At the end of the third quarter, a total of 11 of the hedge funds tracked by Insider Monkey were bullish on this stock, no change from the previous quarter. On the other hand, there were a total of 7 hedge funds with a bullish position in ENIA at the beginning of this year. With the smart money’s positions undergoing their usual ebb and flow, there exists a few notable hedge fund managers who were increasing their stakes meaningfully (or already accumulated large positions). 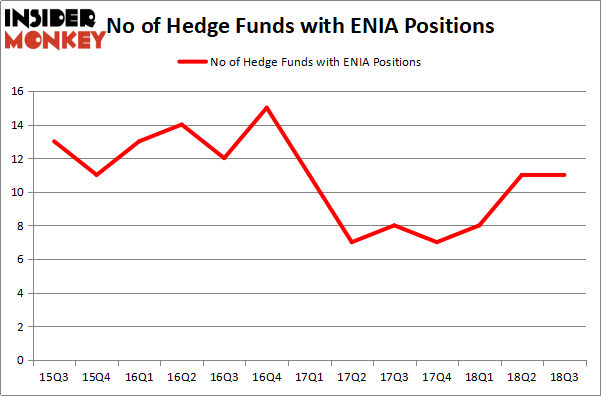 When looking at the institutional investors followed by Insider Monkey, Cliff Asness’s AQR Capital Management has the number one position in Enel Americas S.A. (NYSE:ENIA), worth close to $28.4 million, comprising less than 0.1%% of its total 13F portfolio. Sitting at the No. 2 spot is Renaissance Technologies, led by Jim Simons, holding a $13.8 million position; less than 0.1%% of its 13F portfolio is allocated to the company. Some other peers that hold long positions consist of Dmitry Balyasny’s Balyasny Asset Management, ZilvinasáMecelis’s Covalis Capital and John Overdeck and David Siegel’s Two Sigma Advisors.

Due to the fact that Enel Americas S.A. (NYSE:ENIA) has witnessed bearish sentiment from the smart money, we can see that there was a specific group of fund managers who were dropping their entire stakes by the end of the third quarter. Intriguingly, Bruce Kovner’s Caxton Associates LP sold off the largest investment of the “upper crust” of funds tracked by Insider Monkey, comprising close to $0.9 million in stock. Mike Vranos’s fund, Ellington, also said goodbye to its stock, about $0.2 million worth. These moves are intriguing to say the least, as total hedge fund interest stayed the same (this is a bearish signal in our experience).

As you can see these stocks had an average of 25.75 hedge funds with bullish positions and the average amount invested in these stocks was $936 million. That figure was $61 million in ENIA’s case. Momo Inc (NASDAQ:MOMO) is the most popular stock in this table. On the other hand Pearson PLC (NYSE:PSO) is the least popular one with only 3 bullish hedge fund positions. Enel Americas S.A. (NYSE:ENIA) is not the least popular stock in this group but hedge fund interest is still below average. This is a slightly negative signal and we’d rather spend our time researching stocks that hedge funds are piling on. In this regard MOMO might be a better candidate to consider a long position.