Endo Health Solutions Inc (NASDAQ:ENDP), a diversified healthcare company specializing in pain medication, has been sending out mixed signals recently. News of increased federal scrutiny of painkillers, exacerbated by key patent expirations, have caused shares to slide 16% over the past six months. Meanwhile, the company announced that it intends to put itself on sale, but then followed that up with the appointment of a new CEO. What does all this noise mean for the future of Endo, and how should investors prepare for a chaotic endgame?

Big biotechs like Endo Health Solutions have always been dependent on their patented medications. However, the more dependent they are on patented medications, the more cyclical and riskier the stocks are. As patents expire, new products – sometimes blended from existing ones – must take their place, or steep declines in revenue will follow. Therefore, the industry also creates generic, non-patented products to offset possible losses from its leading patented ones.

Endo Health Solutions Inc (NASDAQ:ENDP) is the product of a spun-off buyout by three DuPont Merck executives in 1997. Its patent portfolio includes 12 important brands – including prescription painkillers Percocet, Percodan and Opana. It also produces Liboderm, a popular painkiller patch which generated $825 million in sales in 2011 — accounting for 30% of Endo’s annual revenue.

However, a recent report revealed that fatal painkiller overdoses in America have now risen for 11 consecutive years. As a result, federal regulators are now investigating how painkiller manufacturers have been producing and marketing their products.

The government is particularly interested in the promotion of Endo’s popular Liboderm patch. Endo is already expecting to take losses, setting aside $194 million to cover possible penalties.

To make matters worse, Endo’s first Liboderm patent expired last May, and its second one will expire in March 2014. This has allowed manufacturers to create generic versions of its first generation product.

Generic drug manufacturer Actavis Inc (NYSE:ACT), which won a patent infringement suit against Endo, announced that it is producing a cheaper, generic version of Liboderm which will become available in September 2013. Actavis, formerly known as Watson Pharmaceuticals, will be required to pay royalties of 25% on early sales to Endo.

With all these headwinds threatening to push the company off course, Endo is now reportedly putting itself on sale. Initial reports claim that Warner Chilcott Plc (NASDAQ:WCRX) and Valeant Pharmaceuticals Intl Inc (NYSE:VRX) have expressed interest in acquiring the beleaguered drugmaker. Yet investors should wonder if a company being squeezed by the government and patent expirations can attract much of an acquisition premium. After all, the company has already warned that it does not expect to meet either top or bottom line growth expectations for fiscal 2013.

In the middle of all this news, Endo appointed a new CEO, Rajiv De Silva, a former executive of Novartis AG (ADR) (NYSE:NVS) and Valeant Pharmaceuticals – to replace retiring CEO Dave Holveck. De Silva can be considered an expert at acquiring and integrating companies in the biotech field – during his time at Novartis and Valeant, he oversaw 40 acquisitions.

While this bodes well for any future acquisitions, it is also puzzling for investors – does Endo really want to sell itself, or is it planning a contingency plan for the future?

Patent expirations and government probes aside, we should take a look at how Endo measures up to two larger industry peers – Abbott Laboratories (NYSE:ABT) and Pfizer Inc. (NYSE:PFE) – on a fundamental scale.

Although Endo definitely looks the cheapest, it also has the highest debt ratio, the lowest return on equity and the slimmest margins. It also doesn’t offer a dividend – making it a weak choice, considering the only real reason to own this stock is to await a buyout offer.

Top and bottom line growth over the past five years also tell a similar story. 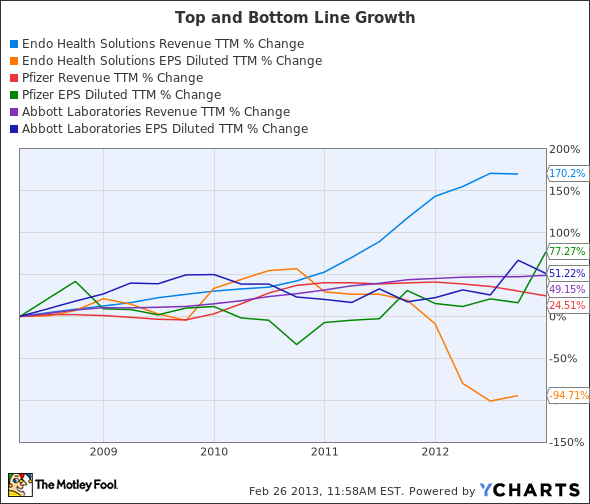 Endo’s top and bottom lines are the most chaotic, with revenue growth easily outpacing its peers, but with profit growth remaining the least impressive of the group.

By all measures, Endo Health Solutions is an unattractive investment. It currently faces a dreaded double whammy of government intervention and patent expirations – which have derailed thriving biotechs in the past.

However, Endo’s endgame is worth watching, since the results of the government probe could seriously impact Actavis’ generic Liboderm sales. Endo’s portfolio could also seriously boost Warner Chilcott and Valeant Pharmaceuticals’ market presence, which may attract other serious suitors to the table.

The article Endo’s Endgame originally appeared on Fool.com and is written by Leo Sun.

The Most Trustworthy Drugs on the Market: Pfizer Inc. (PFE), Bayer AG (BAYN...

Allergan, Inc. (AGN): No Sign of a Slowdown at This Recession Resistant Company...

Three Reasons to Worry and One Theme That Can Outperform: Life Technologies...