EMC Corporation (EMC): America’s 4th Best CEO Will Give You an Investing Edge

Over the past few days, I’ve covered CEOs 25 through 5. Today, I’m going to introduce you to the company with the 4th-highest-rated CEO, give you some background on the company, and at the end, I’ll offer access to a special free report on who is going to win the war between the five biggest tech stocks.

EMC Corporation (NYSE:EMC)
For those who might be unfamiliar with this three-letter entity, EMC Corporation (NYSE:EMC) is a leader in creating data storage and security infrastructure for the growing information needs of today’s world. In other words, it is firmly entrenched in the war to win the battle for providing cloud computing with the necessary components to make the cloud work.

Though the company is valued at roughly $50 billion and has about 60,000 employees, it will have to prove nimble at fending off rivals with deeper pockets to provide the parts necessary to make tomorrow’s cloud work.

International Business Machines Corp. (NYSE:IBM) and Oracle Corporation (NASDAQ:ORCL) represent the bulk of that competition — as both companies are worth three to five times the value of EMC Corporation (NYSE:EMC), and have between two to seven times the employees working for them. Though EMC Corporation (NYSE:EMC) might have been an earlier entrant into the data storage and security arena for the cloud, both of these giants have competing products on the market — Oracle Corporation (NASDAQ:ORCL) with its Exadata and International Business Machines Corp. (NYSE:IBM) with its SmartCloud.

It takes leadership to slay these giants
Leading the charge to win this battle is CEO Joe Tucci. Tucci has been the head of EMC Corporation (NYSE:EMC) since January 2001, and under his guidance, the company has expanded its reach, and with it, its revenue and earnings.

Taken from mid-2002 — which eliminates the dot-com bust he inherited and had little control over — EMC Corporation (NYSE:EMC) has grown revenue and earnings by 13% and 36% per year. 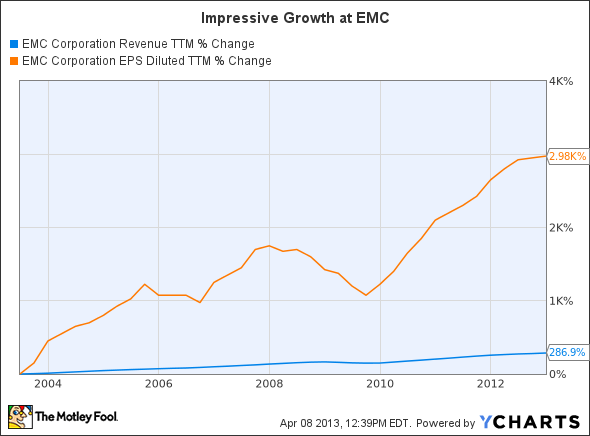