Some of the biggest publishers, including Activision Blizzard, Inc. (NASDAQ:ATVI) and Electronic Arts Inc. (NASDAQ:EA) have used DRM in their flagship titles, while Microsoft Corporation (NASDAQ:MSFT) is widely rumored to be implementing such a system in its next Xbox console. Yet, the requirement of maintaining an Internet connection has alienated many consumers. Should investors be concerned?

As one might expect, always-on DRM has generated a degree of backlash in the gaming community. Game Informer is a monthly magazine devoted to all things video games. The first story in the May issue is dedicated to the controversial subject of DRM.

“Piracy is no small matter for publishers and developers, but neither is the goodwill of the game-buying public,” Matthew Kato writes. “DRM often solves one problem while creating others. Apart from the annoyances of having to rely on an online infrastructure that is not completely reliable even if you’re playing a single-player mode, there is also the larger question of what gamers actually own…What happens if Electronic Arts Inc. (NASDAQ:EA) decides to shut down SimCity servers or if the company closes its doors?”

Later, the magazine reviews EA’s recent SimCity title. Although Game Informer calls the first few hours of the game “wonderful” and praises the level of detail built into the title, it ultimately awards SimCity a poor score based mostly on DRM-related issues.

“Even though the servers run better now, I still experience delays ranging from 5 to 45 minutes when trying to share services or gifts with other cities in my region,” Joe Juba writes, “Given time, Maxis could clear up the problems with SimCity…[EA is] charging gamers for this [lackluster] experience right now. At this point in time, it just isn’t worth your money.” 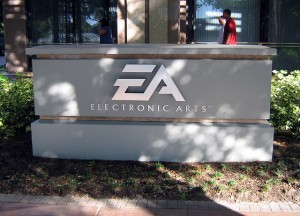 The focus of Game Informer’s attacks on DRM obviously center around Electronic Arts Inc. (NASDAQ:EA)’s SimCity. The game, which was intended to reboot the long-running and enormously popular SimCity franchise, was virtually unplayable shortly after launch.

In SimCity, players construct and manage their own cities. Due to the nature of its gameplay, most SimCity titles have been single-player games, requiring little interaction with the outside world.

But in this new SimCity, EA required the game to be played on its servers. Unfortunately, the servers were not adequate to keep up with the initial demand, leading to a buggy game with widespread connection issues.

Shortly after the SimCity debacle, Electronic Arts Inc. (NASDAQ:EA)’s then-CEO John Riccitiello stepped down. Over his tenure, EA’s stock was a terrible performer, down over 60% since he took the control. Will the next Xbox require DRM?

Microsoft Corporation (NASDAQ:MSFT) has yet to unveil its next Xbox console, but the video game player is widely expected to debut this year. A persistent rumor has claimed that the new Xbox will require a constant connection to the Internet.

Given that the architecture of next-generation consoles is becoming more PC-like, employing PC anti-piracy tactics like DRM would make sense. But that won’t stop gamers from being upset about it.

Microsoft Corporation (NASDAQ:MSFT)’s creative director Adam Orthy took to twitter to criticize the opposition to DRM. In a tweet from early April, Orthy stated that he didn’t “get the drama.” Of course, that wasn’t what gamers wanted to hear.

Microsoft is a huge business, with tentacles in all forms of computing. But as PCs decline in popularity, and Windows 8 fails to attract the attention of mobile users, the Xbox business will become increasingly important. If Microsoft Corporation (NASDAQ:MSFT) does decide to go with DRM for its next console, consumer opposition could lead to tepid sales.