Like everyone else, elite investors make mistakes. Some of their top consensus picks, such as Amazon, Facebook and Alibaba, have not done well in October due to various reasons. Nevertheless, the data show elite investors’ consensus picks have done well on average over the long-term. The top 30 S&P 500 stocks among hedge funds at the end of September 2018 returned an average of 6.7% through November 15th whereas the S&P 500 Index ETF gained only 2.6% during the same period. Because their consensus picks have done well, we pay attention to what elite funds think before doing extensive research on a stock. In this article, we take a closer look at Eastman Kodak Company (NYSE:KODK) from the perspective of those elite funds.

Is Eastman Kodak Company (NYSE:KODK) worth of considering right now? Neither are hedge funds from our database becoming more optimistic about it nor are loosing interest for it. At the end of the third quarter there were five smart money investors long the stock, same as in the previous quarter. Eastman Kodak Company is far from being on of the favorites stocks in recent months. (If you are curious to see which stocks have attracted the most attention from smart money investors take a look at the list of 30 most popular stocks among hedge funds in Q3 of 2018.) In this article we’ll analyze Eastman Kodak Company further more.

In the eyes of most stock holders, hedge funds are seen as unimportant, old investment tools of years past. While there are greater than 8000 funds with their doors open today, Our researchers look at the aristocrats of this club, around 700 funds. These money managers command the lion’s share of the hedge fund industry’s total capital, and by paying attention to their best investments, Insider Monkey has found several investment strategies that have historically outrun the broader indices. Insider Monkey’s flagship hedge fund strategy outperformed the S&P 500 index by 6 percentage points annually since its inception in May 2014 through early November 2018. We were able to generate large returns even by identifying short candidates. Our portfolio of short stocks lost 26.1% since February 2017 even though the market was up nearly 19% during the same period. We just shared a list of 11 short targets in our latest quarterly update.

“Eastman Kodak (“KODK”) – Kodak is a global commercial printing and imaging company for the graphic arts, entertainment, and commercial film industries. Having been left behind in the technological shift away from film-based photography as virtually everyone came to have a digital camera in their smart-phone, Kodak filed for bankruptcy in early 2012 and emerged in mid-2013. The Company exited its consumer-related businesses during the bankruptcy and is now focused on its commercial imaging operations and exploitation of its remaining portfolio of intellectual property. To fund its exit from bankruptcy and provide growth capital, the Company issued the $420 million Senior Secured 1st Lien Exit Term Loan due 9/3/19 (subsequently paid down to $393 million). Given the looming maturity, Kodak received a “going concern” assessment from its auditor in its 2Q18 financial statements and now lists the loan as a “current obligation” on its balance sheet. Management is intensely focused on de-leveraging and is seeking a way to repay the term loan. In early August, Kodak announced it will sell its flexographic equipment division, a leading producer of printing equipment and consumables for the consumer packaging industry. Kodak also entered into a non-binding letter of intent for a $400 million, 18-month bridge loan that would be used to refinance its existing term loan in conjunction with its asset sale. We expect the Company will be successful in the sale of the flexographic equipment business and believe Kodak’s other assets, including $132 million of domestically-held cash10 provide value in excess of its term loan. In 3Q18, we added to our Kodak position in the RiverPark Strategic Income Fund at a 12.87% yield-to-maturity. We recognize the potential for event and timing risk but remain hopeful that Kodak will find a way to repay the loan without hiccups. Ultimately, we are confident the Company will pay all principal and interest, but mark-to-market volatility is certain should a restructuring be required.”

Continuing with our analysis we’ll take a peek at the key hedge fund action regarding Eastman Kodak Company (NYSE:KODK).

At the end of the third quarter, a total of 5 of the hedge funds tracked by Insider Monkey were long this stock, same as in the second quarter of 2018. Below, you can check out the change in hedge fund sentiment towards KODK over the last 13 quarters. With hedge funds’ positions undergoing their usual ebb and flow, there exists an “upper tier” of noteworthy hedge fund managers who were upping their stakes significantly (or already accumulated large positions). 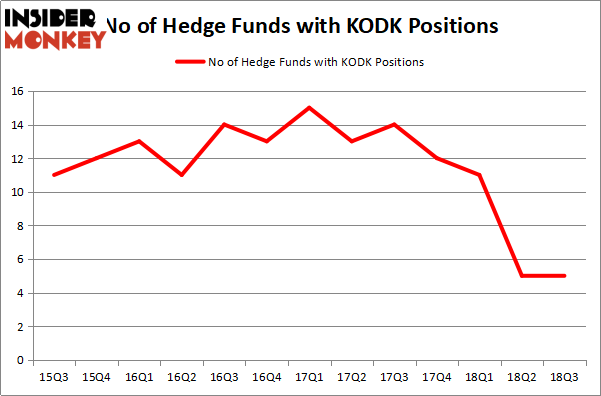 Among these funds, Southeastern Asset Management held the most valuable stake in Eastman Kodak Company (NYSE:KODK), which was worth $15.4 million at the end of the third quarter. On the second spot was Citadel Investment Group which amassed $0.1 million worth of shares. Moreover, D E Shaw, Citadel Investment Group, and AQR Capital Management were also bullish on Eastman Kodak Company (NYSE:KODK), allocating a large percentage of their portfolios to this stock.

Since Eastman Kodak Company (NYSE:KODK) has faced declining sentiment from the aggregate hedge fund industry, it’s safe to say that there is a sect of fund managers that elected to cut their full holdings in the third quarter. It’s worth mentioning that Matthew Hulsizer’s PEAK6 Capital Management dumped the largest stake of the 700 funds followed by Insider Monkey, totaling an estimated $0.1 million in call options. Bart Baum’s fund, Ionic Capital Management, also sold off its call options, about $0.1 million worth. These moves are important to note, as aggregate hedge fund interest stayed the same. This is a bearish signal in our experience, and taking all discussed here into account, we would skip this stock and consider some of the more popular ones for a longer run.