DryShips Inc. (DRYS): Is There Hope for this Struggling Shipper?

Back in 2008, DryShips Inc. (NASDAQ:DRYS) used to be the crown jewel of the shipping industry. With a fleet size second to none, and a market capitalization greater than $3 billion, DryShips dominated the market and held a special place in investors’ hearts.

Yet over the past five years, the gloomy demand environment within the dry bulk sector nearly sunk the company. As the Baltic Dry Index kept bumping along the bottom, the stock remained trapped in a steep downtrend. DryShips lost its crown, unable to stanch its cash bleeding or enhance shareholders’ value.

Against this backdrop, the shipper found support in the comparably healthy offshore drilling business through its majority ownership stake in Ocean Rig UDW Inc (NASDAQ:ORIG). But just a few days ago, DryShips announced the public offering of 7.5 million Ocean Rig common shares, reducing its stake to 59.4%. Does this latest business decision bode well for the struggling giant’s future prospects?

With that in mind, I decided to take a look at how Dryships compares to Navios Maritime Partners L.P. (NYSE:NMM) regarding the average change in time charter equivalents for the dry bulk carrier segment:

*At the time of writing, Dryships had not reported its fourth-quarter and full-year 2012 earnings. For the first nine months of 2012, the company’s TCE posted a more than 35% decline compared to the same period in 2011, and stood at approximately $17,719.

Over the past five years, DryShips has failed to deliver satisfying operating results. The tight demand environment in the dry bulk sector negatively impacted the number of revenue-generating days for its fleet. In addition, average charter revenues remained ominously below the cash break-even point. Consequently, the firm’s net income slumped. The following chart is worth a thousand words: 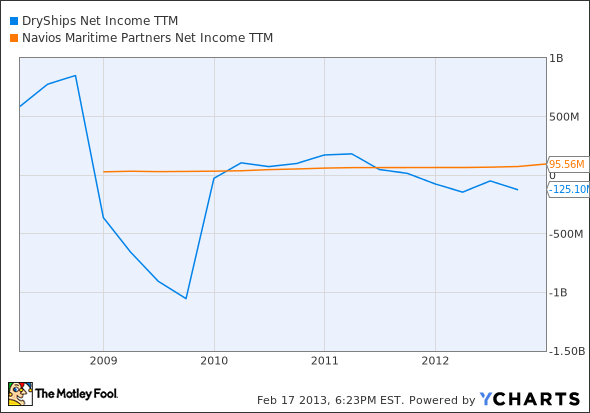 DryShips’ contract coverage stands at roughly 33% of calendar days for 2013. This means that with most of its contracts about to expire, DryShips will not be able to generate fruitful cash flows.

Despite positive signs for the future of the dry bulk sector, current market conditions do not present lucrative opportunities for ship owners. 2012 was the slowest contracting year in over a decade, with less than 300 new contracts signed. Most importantly, the prevailing oversupply of vessels prevents time charter rates from flying high.

On the other hand, Navios Maritime Partners achieved a comparably robust performance largely by relying on a conservative business model. Navios Partners’ strategy of fixing its vessels under medium to long-term charters when the market is healthy gave the company greater resilience against short-term volatility. Thus, amid a tough market environment, the firm enjoyed a stable base of revenue and was able to augment its cash-generating capacity. In turn, it rewarded its shareholders by increasing its cash distributions.