U.S. stocks opened slightly lower this morning, with the S&P 500 (S&P Indices:.INX) and the narrower, price-weighted Dow Jones Industrial Average (Dow Jones Indices:.DJI) down a negligible 0.07% and 0.09%, respectively, at 10:15 a.m. EDT. Pundits are pointing the finger at the weak print for Japan’s second-quarter GDP growth, which came in at 2.6% annualized — a full percentage point short of the forecast. Japan’s NIKKEI 225 (INDEXNIKKEI:NI225) finished it session down 0.7%, but that’s hardly troublesome for a volatile index; last Wednesday, for example, the Nikkei fell 4%.

Is the U.S. still the best place to invest?
Last Friay, I did some myth-busting regarding “strong” U.S. corporate earnings, and the week prior to that I explained why the problem is earnings. In the same vein, over the weekend the Financial Times‘ excellent John Authers looked at the baffling recovery of the profitless stocks (subscription required to view). His conclusion:

But the real reason [behind the stock market rally] has to do with cash. US companies are not generating that much in revenues but, over the past 12 months, they returned a record amount of it to investors, according to JPMorgan. This is an admission that they see few opportunities to invest for growth. But, in an environment where investors take little on trust and are desperate for a yield from anywhere, it has helped the rally keep going. This is not a strategy that can last forever.

However, even Mr. Authers, who is not particularly bullish on the U.S., is forced to admit:

As in economics, however, what looks like a drab story of slow progress in the US turns into something far more impressive when compared with the rest of the world. Companies in MSCI’s World excluding the US index have suffered an average 6.5 per cent decline in earnings over the past year. Earnings are down 24 per cent from its peak.

The equivalent figures for the U.S. are respective increases of 3.6% and 16%. Maybe the U.S. stock market rally (see graph below) owes largely to the U.S. being perceived as the best house in a blighted, post-crisis neighborhood — the best “fixer-upper,” to extend the real-estate metaphor. 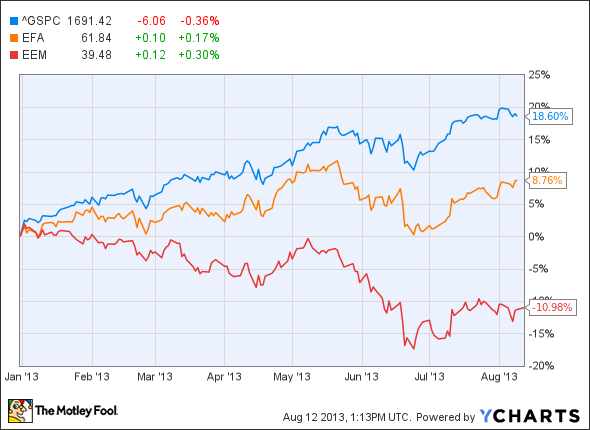 If so, that dynamic looks set to continue, based on the results of today’s investor poll on the front page of Yahoo! Finance. Asked whether the U.S. is “still the best place to be investing right now,” more than two-thirds (68%) of the more than 100,000 respondents answered “yes” — well ahead of the BRIC nations (15%), Europe (10%), and Japan (7%).

The article Is the U.S. Still the Best Place to Invest? originally appeared on Fool.com and is written by Alex Dumortier, CFA.