On Wednesday, The Wall Street Journal reported that American Airlines parent AMR and US Airways Group, Inc. (NYSE:LCC) were finally closing in on a merger agreement. Other sources, such as CNBC, have recently followed suit. US Airways, led by CEO Doug Parker, has been pursuing a merger with American since the latter filed for bankruptcy in November 2011. While American’s management initially resisted merging with US Airways, pressure from labor unions and creditors has apparently worn down AMR CEO Tom Horton. Reports have suggested that AMR creditors will own 72% of the merged carrier, while US Airways shareholders will receive the remaining 28%.

A merged American Airlines-US Airways would leap over Delta Air Lines, Inc. (NYSE:DAL) and United Continental Holdings Inc (NYSE:UAL) to become the largest airline in the world by passenger traffic. This would be a big boon for American and US Airways, as their smaller networks have put them at a disadvantage, compared to Delta and United, when competing for lucrative corporate contracts. These potential benefits have been reflected in the US Airways share price, which has more than tripled since American filed for bankruptcy. 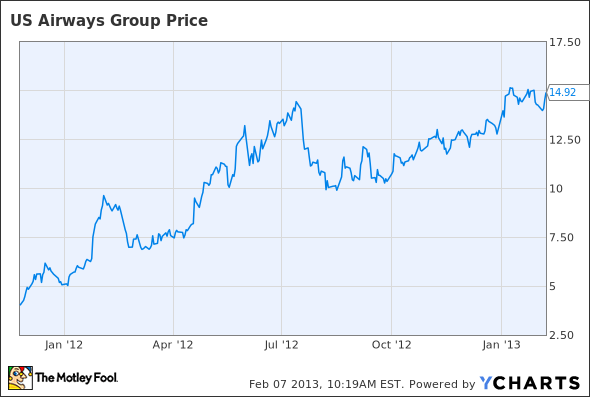 Nevertheless, merger integration costs are likely to be substantial, and employees are owed massive pay raises, particularly at US Airways. As a result, investing in US Airways now would be a dubious proposition. Moreover, since AMR is currently in bankruptcy, the company’s creditors have “absolute priority” over AMR common stockholders. AMR stock could very well be declared worthless when the company exits bankruptcy (although there is a possibility, due to legal technicalities, that the stock could have some value). On the whole, if you are a long-term investor, the best thing for you to do now is stay on the sidelines.

Integration costs are massive
Merging two major airlines is a long and costly process. Labor groups need to be integrated, check-in counters need to be co-located, signage needs to be changed, planes need to be repainted, IT systems must be updated or replaced, etc. United and Continental formally merged on Oct. 1, 2010, and the two still have not fully completed the integration process. In the past three years, United Continental has already recognized a whopping $1.85 billion of merger integration costs, as well as $600 million in severance and labor agreement costs that were directly related to the merger. By the time that merger is complete, integration costs could be close to $3 billion.

For American and US Airways, merger integration costs are likely to be similar. Labor integration costs could be particularly steep because US Airways pilots and flight attendants have been working under bankruptcy-era contracts that were imposed almost a decade ago. As a result, US Airways pilots are currently earning as much as 50% less than the industry average. Since management has promised to raise pay levels to industry standards in a merger scenario, significant cost increases are guaranteed to occur.

In addition to increasing future pay rates, it is typical for new labor contracts to include substantial signing bonuses to make up for raises that workers have missed. For United Continental pilots, the signing bonuses totaled $400 million. For US Airways and American Airlines, the long duration of the previous “concessionary” contracts could push the bonuses even higher.

Benefits are uncertain
According to US Airways, a merger with American will produce $1.2 billion of annual revenue and cost synergies. If the savings are as great as advertised, then a $3 billion merger integration tab may be an acceptable price to pay. However, there is no guarantee that the advertised benefits will materialize. Revenue synergies are particularly tricky to forecast, because competitors’ strategies can have a major impact on passenger behavior.