Hedge funds are not perfect. They have their bad picks just like everyone else. Micron, a stock hedge funds have loved, lost 50% during the last 12 months ending in October 30. Although hedge funds are not perfect, their consensus picks do deliver solid returns, however. Our data show the top 30 S&P 500 stocks among hedge funds at the end of June 2014 yielded an average return of 9.5% in the same time period, vs. a gain of 5.2% for the S&P 500 Index. Because hedge funds have a lot of resources and their consensus picks do well, we pay attention to what they think. In this article, we analyze what the elite funds think of Domino’s Pizza, Inc. (NYSE:DPZ).

Several hedge funds sold out of Domino’s during Q2, but the pizza delivery chain remained extremely popular among the wealthiest investors, ranking 5th on our list of the 25 Stocks Billionaires Are Piling On. Jim Simon’s Renaissance Technologies (3.45 million shares) and Chase Coleman’s Tiger Global Management (2.11 million shares) held the two largest positions in Domino’s on June 30. Domino’s shares have gained 35% in 2018 and over 8% since May 7, when we ranked it as one of the 3 Stocks to Buy Ahead of the 2018 World Cup. Domino’s biggest growth may be behind it now, and some other pizza franchises are struggling, suggesting the pizza delivery market may have peaked amid intensifying competition in the food delivery space. That may have prompted some of the less wealthy hedge funds to move their gains from Domino’s into other investments.

To most traders, hedge funds are seen as slow, old financial vehicles of years past. While there are over 8,000 funds trading at the moment, our researchers hone in on the crème de la crème of this group, about 700 funds. These money managers orchestrate the bulk of all hedge funds’ total capital, and by observing their finest picks, Insider Monkey has found various investment strategies that have historically outrun the market. Insider Monkey’s small-cap hedge fund strategy outpaced the S&P 500 index by 12 percentage points per year for a decade in our back tests.

What does the smart money think about Domino’s Pizza, Inc. (NYSE:DPZ)?

At the end of the third quarter, a total of 26 of the hedge funds tracked by Insider Monkey were long this stock, a drop of 19% from one quarter earlier. Below, you can check out the change in hedge fund sentiment towards DPZ over the last 6 quarters. So, let’s examine which hedge funds were among the top holders of the stock and which hedge funds were making big moves. 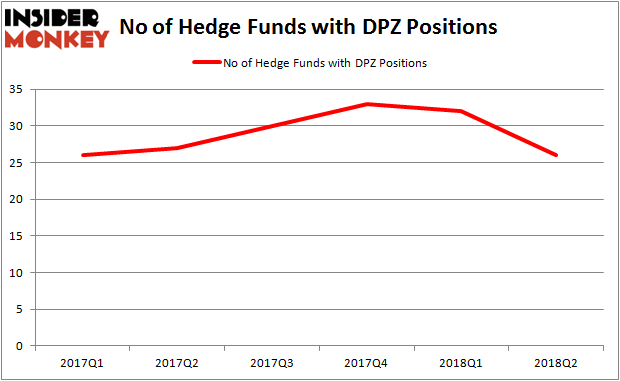 The largest stake in Domino’s Pizza, Inc. (NYSE:DPZ) was held by Renaissance Technologies, which reported holding $973.9 million worth of stock as of the end of June. It was followed by Chase Coleman’s Tiger Global Management with a $594.2 million position. Other investors bullish on the company included Crestwood Capital Management, Shellback Capital, and Chilton Investment Company.

Since Domino’s Pizza, Inc. (NYSE:DPZ) has witnessed declining sentiment from the entirety of the hedge funds we track, it’s safe to say that there lies a certain “tier” of money managers that decided to sell off their full holdings heading into Q3. Interestingly, Lee Ainslie’s Maverick Capital sold off the biggest stake of all the hedgies followed by Insider Monkey, valued at about $24.7 million in stock, and Alexander Mitchell’s Scopus Asset Management was right behind this move, as the fund cut about $18.2 million worth of shares. These transactions are important to note, as aggregate hedge fund interest was cut by 6 funds heading into Q3.

As you can see these stocks had an average of 18 hedge funds with bullish positions and the average amount invested in these stocks was $320 million. That figure was $2.37 billion in DPZ’s case. Arthur J. Gallagher & Co. (NYSE:AJG) is the most popular stock in this table. On the other hand Coca-Cola FEMSA, S.A.B. de C.V. (ADR) (NYSE:KOF) is the least popular one with only 9 bullish hedge fund positions. Compared to these stocks Domino’s Pizza, Inc. (NYSE:DPZ) is more popular among hedge funds. Considering that hedge funds and billionaires are fond of this stock in relation to its market cap peers, it may be a good idea to analyze it in detail and potentially include it in your portfolio, bearing in mind that growth is slowing and a further short-term pullback wouldn’t be surprising.

25 Stocks Billionaires Are Piling On3 Stocks to Buy Ahead of the 2018 World CupIs DPZ A Good Investment Right Now?Is DPZ A Good Stock To Buy?NYSE:DPZYahoo Finance