Domino’s Pizza, Inc. (DPZ) Is Too Expensive: Buy These Alternatives Instead!

Domino’s Pizza, Inc. (NYSE:DPZ) has come a long way since hitting an all-time low of $2.61 per share in 2008.  During the financial crisis, anything related to retail or any type of discretionary spending got beaten up worse than most of the financials that were causing all the mess!  Once the market realized that Domino’s was a pretty solid company that wasn’t going anywhere, it began its almost linear rise since then, and is currently trading over $45.  While this has indeed been a remarkable run, I believe it may have gone a bit too far.

Domino’s delivers more pizzas than anyone else and has a 23% market share, with over 5,000 stores domestically in addition to over 4,800 internationally.  Domino’s has grown its revenues nicely in recent years, mainly due to highly increased marketing efforts and drastic changes to their pizza formula (it really is that much better).  In fact, after the new pizza recipes were introduced, same-store sales increased by 9.9% in 2010 alone, a huge increase for any established retail business.

Domino’s plans to continue to grow its number of franchised stores, particularly internationally where the company feels the largest opportunities for the pizza delivery business exist.  Just last year, the company opened 413 stores internationally (all franchises), with the most openings in India, Turkey, and the U.K.

While I do agree that Domino’s is a solid company with an excellent product, I simply think that the company is overvalued at current levels, especially compared to its peers such as Papa John’s Int’l, Inc. (NASDAQ:PZZA) and Pizza Hut, one of Yum! Brands, Inc. (NYSE:YUM)’ restaurant names.

Domino’s currently trades at a lofty 26.2 times TTM earnings, with an average annual earnings growth rate of 15.8% over the next three years, according to consensus estimates.  Additionally, Domino’s does not have a good history of revenue growth (see below), has not paid a regular dividend in years, and has a significant amount of debt on the balance sheet (about $1.5 billion). 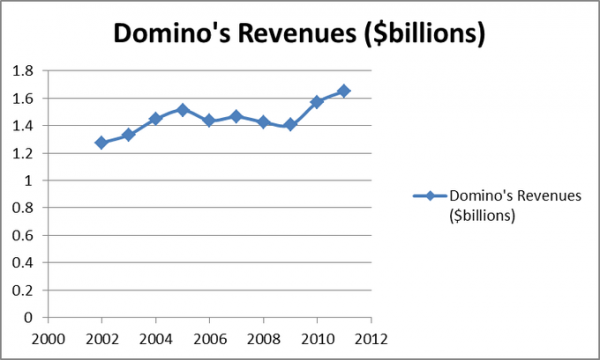 Papa John’s International operates a total of just under 4,000 stores and trades at a lower multiple of 22 times TTM earnings.  The company is actually expected to grow earnings slightly faster than Domino’s, at a 16.8% average rate.  I am also much more of a fan of Papa John’s balance sheet.  Not only does the company have much less debt than Domino’s, but they are reducing debt at an incredible rate.  Since 2007, Papa John’s total debt has dropped from $143 million (not billion!) to just over $50 million.  As far as a “pure pizza” play goes, Papa John’s just seems to make more sense as an investment right now, until Domino’s pulls back a bit.