Before getting to anything else, let’s look at the following chart that compares the performance of the nation’s largest deep-discount, dollar stores versus the S&P 500 . 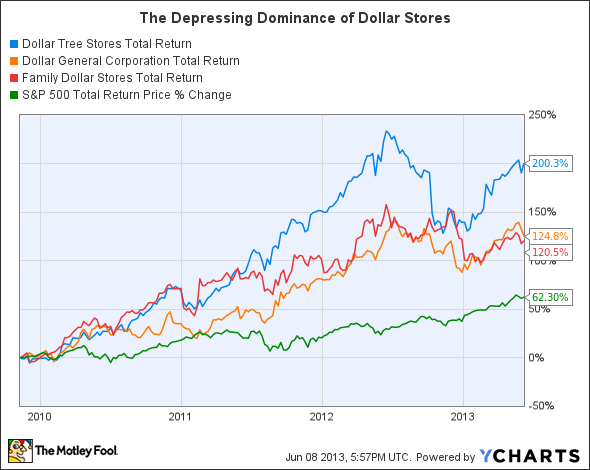 If you’re anything like me, two things went through your head when you saw this. First, you regret that you missed out on the investment opportunity. Since the end of 2009, shares in all three of these companies, led by Dollar Tree, Inc. (NASDAQ:DLTR), have simply trounced the broader market. Even the worst performer of the bunch, Family Dollar Stores, Inc. (NYSE:FDO), beat it by nearly a factor of two.

At the same time, however, one can’t help lamenting their success and what it means for the United States. I mean, think about it for a second. We’re the largest, most economically dominant country in the world, yet the most vibrant companies within our borders are dollar stores? Not to knock their operations, because I firmly believe that there’s a time and a place for everything, but have you been in one? Is this really where we want a growing proportion of our citizens to buy food and clothing for their children?

The growth of Dollar General Corp. (NYSE:DG) over the past five years provides a textbook case of this trend. Since the end of 2006, it’s opened a net 2,277 new stores, increased the average size of each location, and is making 30% more per store than it was before the financial crisis. All told, its net sales over this time period have gone from $9.2 billion up to $16 billion today — an increase of 75%. By comparison, Target Corporation (NYSE:TGT), a middle-class establishment if there ever was one, has seen its top line expand by only a cumulative 24% while, more tellingly, its sales per store have actually decreased in real terms over the same five-year time span.

My point is that these stores, and thus the performance of their respective shares, are a useful and easily accessible barometer for the health of the underlying economy and particularly that of the oh-so-critical middle class. It can’t be forgotten that nearly three-quarters of our gross domestic product derives from consumption. And if that consumption is being channeled into stores that advertise their wares by affixing the word “dollar” to their brand, well, you do the math.

The article The Depressing Dominance of Dollar Stores originally appeared on Fool.com.

John Maxfield and The Motley Fool have no position in any of the stocks mentioned.