Dividend investors like to see an ongoing commitment from companies to raise their payouts over time, and Family Dollar Stores, Inc. (NYSE:FDO) has delivered on that score for 37 straight years. That track record is good enough to put Family Dollar Stores, Inc. (NYSE:FDO) into the elite ranks of the Dividend Aristocrats, which extends membership to the small number of companies that have succeeded in posting a quarter-century of consecutive annual dividend increases.

But one thing every investor needs to understand about the Dividend Aristocrats is that there’s no requirement that a stock pay a particularly large dividend — only that it increase whatever dividend it chooses to pay. With just a 1.5% yield, Family Dollar Stores, Inc. (NYSE:FDO) shareholders aren’t necessarily entirely happy with the company’s capital allocation decisions despite its enviable dividend track record. Let’s take a closer look at Family Dollar Stores, Inc. (NYSE:FDO) to see whether it’s likely to be able to sustain or even improve on its dividend growth.

Boom times for Family Dollar
One big reason Family Dollar investors probably haven’t been too disappointed about its meager payout is that its stock has posted impressive long-term gains. The dollar-store retailer really came into its own during the 2008 recession, when the stock managed to climb nearly 40% even as the broader stock market plunged by roughly that amount. The reason was simple: Cash-strapped consumers suddenly found themselves having to stretch their budgets to the limit, and even traditional big-box discount retailers had price points above what many consumers could afford. Family Dollar met the deep-discount needs of those customers, and even as the recession has given way to a modest economic recovery, shoppers have continued to see the value proposition that Family Dollar Stores, Inc. (NYSE:FDO) and its peers provide.

Family Dollar’s most recent earnings announcement demonstrates its continued success. Same-store sales rose 2.9% as part of the company’s 9% gain in overall revenue. In particular, it has chosen to rely on increased sales of food, tobacco, over-the-counter medical goods, and beauty products. Getting almost 70% of revenue from those products, Family Dollar stands out from rival Dollar Tree, Inc. (NASDAQ:DLTR), which got just more than half of its sales from that category last year. The trade-off is that Dollar Tree, Inc. (NASDAQ:DLTR) has been able to maintain better margins, as food and similar goods carry lower markup potential than other items that dollar stores traditionally sell.

The biggest threat to Family Dollar Stores, Inc. (NYSE:FDO), though, is heightened competition. Dollar General Corp. (NYSE:DG) has aggressively expanded with new stores, already boasting the biggest market capitalization in the industry and operating more than 10,000 locations. With plans for more than 600 new stores and about 550 store remodeling or relocation projects, Dollar General Corp. (NYSE:DG) wants to boost its presence in the industry. In addition, Wal-Mart Stores, Inc. (NYSE:WMT) has identified the competitive force of deep discounters and is fighting back with supercenter expansions designed at enticing shoppers with one-stop shopping opportunities. Greater grocery availability should help increase the number of recurring visits it gets from customers, potentially diverting business from Family Dollar and its peers. 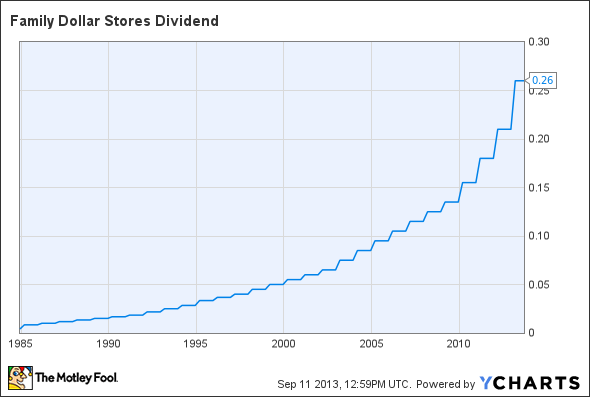