I think Yelp Inc (NYSE:YELP) may need some serious help. The San Francisco-based online business review website missed fourth quarter estimates as expenses took at bite out of revenue. Does Yelp need to be taught a few harsh lessons in frugality before it crashes, like so many Internet and social media stocks before it?

Yelp is a search engine for local businesses, but its key feature is the ability to review businesses for peers across a social network. With integration with GPS technology in smartphones, Yelp can also provide reviews on the go. Yelp’s market is considered a niche market, primarily focused on local online ads — a market that research firm BIA/Kelsey projects to rise from $21.2 billion in 2011 to $38.1 billion in 2016.

For its fourth quarter, Yelp reported a loss of 8 cents, or $5.32 million, missing estimates by 3 cents per share. Revenue topped estimates, surging 65% to $41.2 million. However, sales and marketing expenses soared 59% to $25.5 million, gobbling up 62% of Yelp’s total revenue.

Those numbers certainly look hazardous to Yelp’s financial health. Let’s review the fundamentals to see how the company is holding up, and how it measures up to another high growth social media commerce stock — Groupon Inc (NASDAQ:GRPN).

Despite its recent troubles, Groupon is a better fundamental value, while Yelp’s lopsided fundamentals make it completely overvalued. Surprisingly, Yelp doesn’t shoulder any debt yet, but if its trend of posting losses continues, then this could change next year.

Let’s compare how Yelp’s stock has performed against its social media peers since its market debut last March. 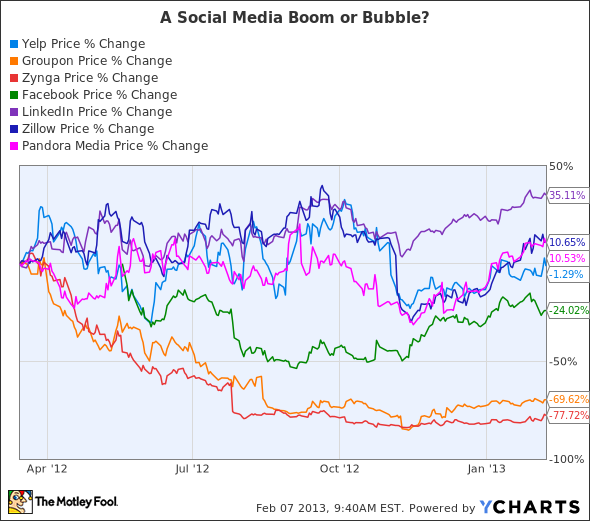 Although comparing Yelp directly to other social media businesses isn’t absolutely fair, since they operate on different business models, they all exhibit the classic problem that their late 20th century Internet startup predecessors faced — soaring revenue being outpaced by out-of-control marketing and expansion expenses.

Crunch these year-on-year numbers for fiscal 2012.

Let’s see how Yelp has fared in terms of revenue and earnings growth, as well as cash reserves and operating margins. 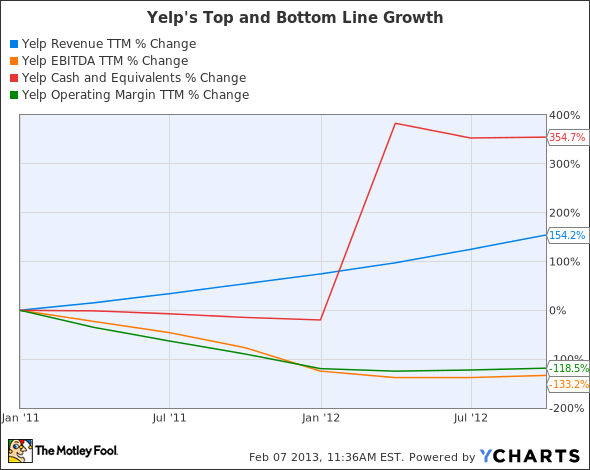 For now, Yelp is still generating revenue faster than it is losing money, but CEO Jeremy Stoppelman recently announced plans to expand into additional markets, which will increase expenses in 2013.

Can Yelp Thrive in Overseas Markets?

Stoppelman introduced Yelp to 26 new cities in 2012, and expanded into Poland and Turkey during the fourth quarter. Yelp is now available in 97 markets and 20 countries worldwide. While that kind of ambition is admirable, Stoppelman also noted that these new locations could take 18 to 36 months to start generating revenue and become earnings accretive.

While Yelp has enjoyed success in the United States, its potential in other markets is questionable. Many wired emerging markets, including China, already have their own restaurant review apps, which are synchronized to online reviews and Google Inc NASDAQ:GOOG) Maps. In addition, Google’s own star-based review system, which operates on the same principle, is also gaining popularity, and integrates more smoothly into Google’s own Android and desktop search systems.