Charles Schwab has consistently improved revenue over the past three years. Revenue also increased 8.50% last quarter on a year over year basis. However, earnings have been inconsistent.

The good news is that Charles Schwab Corp (NYSE:SCHW) is consistently profitable. Over the past five years, diluted EPS ranged between $0.38 and $1.05.  Investors liked the 5.60% year over year earnings increase last quarter, which helped drive the stock price higher. 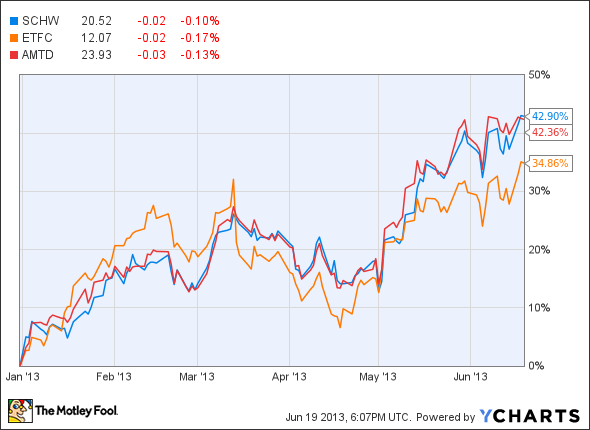 For the most part, the industry has traded together, but it’s always nice to see when your investment comes in first place. An added bonus is the 1.10% yield. That said, TD Ameritrade Holding Corp. (NYSE:AMTD) currently yields 1.50% in dividends. Unfortunately, E TRADE Financial Corporation (NASDAQ:ETFC) doesn’t offer any yield. However, you shouldn’t knock E*TRADE for this. It has too much debt to offer such a luxury.

Charles Schwab Corp (NYSE:SCHW), on the other hand, has a very strong cash position, which increases the likelihood of more capital being returned to shareholders in the future.

Below are the debt-to-equity ratios for each company:

Charles Schwab Corp (NYSE:SCHW) and TD Ameritrade Holding Corp. (NYSE:AMTD) have excellent debt management, while E*TRADE has been working to improve in this area for many years.

What about valuation and profit margin? 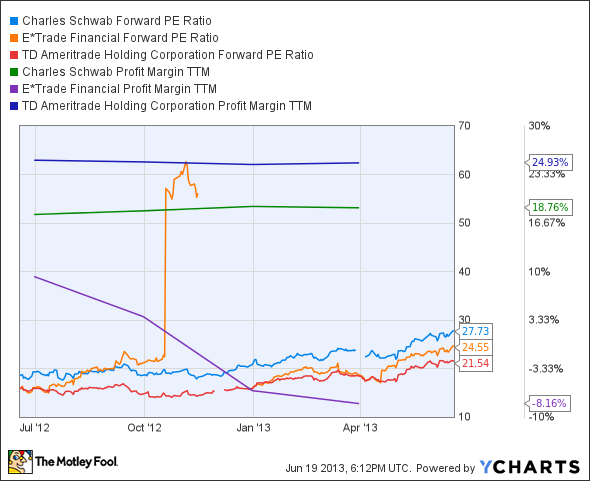 By this point, it should be evident that E TRADE Financial Corporation (NASDAQ:ETFC) is the riskiest investment. There would be little sense investing in a company that has similar valuation to peers while having debt issues and a negative profit margin.

Charles Schwab Corp (NYSE:SCHW)’s impressed last quarter, but this should come as no surprise to those who are familiar with the the company; it has a history of beating expectations. And companies with that kind of history tend to keep the trend going.