Over the past 12 months, shares of BB&T Corporation (NYSE:BBT) have underperformed both its peers on the KBW Bank Index and the broader market’s S&P 500. Their total return of 14.7% is below the former by roughly 18 percentage points and the latter by almost 4 percentage points. But while this performance is underwhelming, it forces current and prospective investors to question whether the popular mid-Atlantic bank will rebound and outpace these benchmarks going forward. 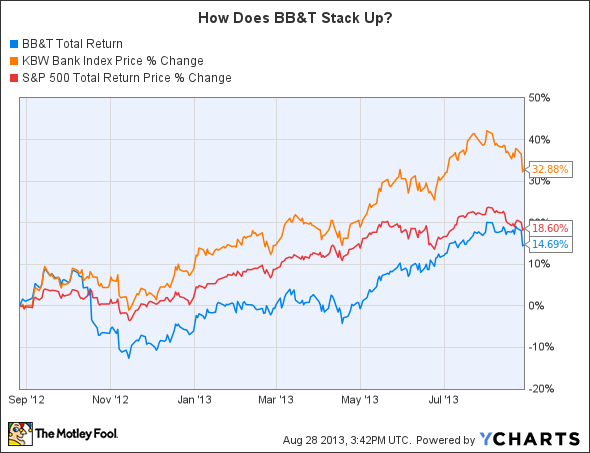 According to the collective insight of banking analysts, the answer to this question may be yes. The median target price of the 28 analysts surveyed by Standard & Poor’s Capital IQ is $38 a share, with a high estimate of $40 and a low of $30. As of the time of writing, BB&T Corporation (NYSE:BBT) trades for $34.56 per share. Consequently, if the analysts are to be believed, which is admittedly a big “if,” then there’s an anticipated upside of nearly 10%.

The bullish price target is a clear indication of the quality of BB&T Corporation (NYSE:BBT)’s underlying operations, as few banks would be assumed to have as much upside given a comparable valuation. At present, shares of the bank trade for 2.11 times tangible book value and 1.3 times book value. As you can see in the table above, those figures are 16% and 4% more, respectively, than the 24-member KBW Bank Index, of which BB&T Corporation (NYSE:BBT) is a member. However, its 14.7 price-to-earnings ratio is 3% less than the KBW and 17% below that of the average stock on the S&P 500.

At the end of the day, this is a quick and rudimentary analysis that shouldn’t be relied upon singularly when deciding whether or not to buy or sell shares of BB&T Corporation (NYSE:BBT). What it shows us instead is that a deeper look at BB&T Corporation (NYSE:BBT)’s shares is definitely in order, as buying any stock at an above-average valuation potentially dampens any future upside.

The article Does BB&T’s Stock Deserve a Deeper Look? originally appeared on Fool.com and is written by John Maxfield.