Legendary investors such as Leon Cooperman and Seth Klarman earn enormous amounts of money for themselves and their investors by doing in-depth research on small-cap stocks that big brokerage houses don’t publish. Small cap stocks -especially when they are screened well- can generate substantial outperformance versus a boring index fund. That’s why we analyze the activity of those elite funds in these small-cap stocks. In the following paragraphs, we analyze Xerium Technologies, Inc. (NYSE:XRM) from the perspective of those elite funds.

Is Xerium Technologies, Inc. (NYSE:XRM) a buy right now? Money managers are selling. The number of long hedge fund bets were cut by 1 in recent months. Our calculations also showed that XRM isn’t among the 30 most popular stocks among hedge funds.

At the end of the third quarter, a total of 13 of the hedge funds tracked by Insider Monkey held long positions in this stock, a change of -7% from one quarter earlier. By comparison, 11 hedge funds held shares or bullish call options in XRM heading into this year. With hedgies’ positions undergoing their usual ebb and flow, there exists a few noteworthy hedge fund managers who were upping their stakes meaningfully (or already accumulated large positions). 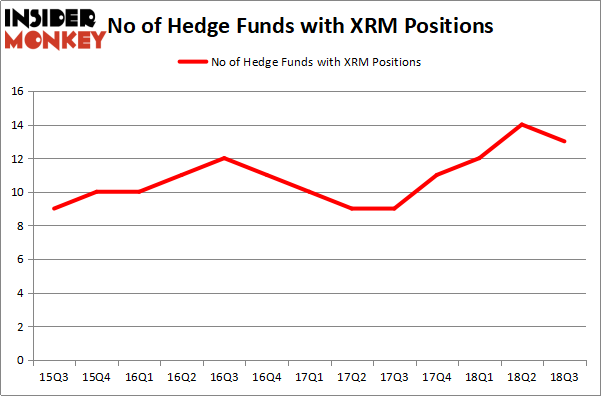 According to publicly available hedge fund and institutional investor holdings data compiled by Insider Monkey, Jim Simons’s Renaissance Technologies has the biggest position in Xerium Technologies, Inc. (NYSE:XRM), worth close to $11.5 million, accounting for less than 0.1%% of its total 13F portfolio. Coming in second is Water Island Capital, managed by John Orrico, which holds a $11 million position; 0.6% of its 13F portfolio is allocated to the company. Some other members of the smart money with similar optimism comprise Peter Schliemann’s Rutabaga Capital Management, Israel Englander’s Millennium Management and David Alexander Witkin’s Beryl Capital Management.

Due to the fact that Xerium Technologies, Inc. (NYSE:XRM) has faced a decline in interest from hedge fund managers, logic holds that there were a few money managers that elected to cut their positions entirely in the third quarter. Intriguingly, Nelson Obus’s Wynnefield Capital sold off the biggest investment of all the hedgies followed by Insider Monkey, comprising close to $15.5 million in stock. James A. Mitarotonda’s fund, Barington Capital Group, also said goodbye to its stock, about $8.8 million worth. These transactions are interesting, as total hedge fund interest was cut by 1 funds in the third quarter.

As you can see these stocks had an average of 4.75 hedge funds with bullish positions and the average amount invested in these stocks was $19 million. That figure was $41 million in XRM’s case. Century Casinos, Inc. (NASDAQ:CNTY) is the most popular stock in this table. On the other hand Parke Bancorp, Inc. (NASDAQ:PKBK) is the least popular one with only 2 bullish hedge fund positions. Compared to these stocks Xerium Technologies, Inc. (NYSE:XRM) is more popular among hedge funds. Considering that hedge funds are fond of this stock in relation to its market cap peers, it may be a good idea to analyze it in detail and potentially include it in your portfolio.