Hedge funds and large money managers usually invest with a focus on the long-term horizon and, therefore, short-lived dips on the charts, usually don’t make them change their opinion towards a company. This time it may be different. During the first 6 weeks of the fourth quarter we observed increased volatility and small-cap stocks underperformed the market. Hedge fund investor letters indicated that they are cutting their overall exposure, closing out some position and doubling down on others. Let’s take a look at the hedge fund sentiment towards Weibo Corp (NASDAQ:WB) to find out whether it was one of their high conviction long-term ideas.

Weibo Corp (NASDAQ:WB) shareholders have witnessed an increase in activity from the world’s largest hedge funds recently. Our calculations also showed that WB isn’t among the 30 most popular stocks among hedge funds.

According to most investors, hedge funds are assumed to be unimportant, outdated financial tools of years past. While there are more than 8,000 funds with their doors open at the moment, Our researchers look at the leaders of this group, approximately 700 funds. These investment experts watch over the majority of the hedge fund industry’s total capital, and by shadowing their highest performing equity investments, Insider Monkey has formulated a few investment strategies that have historically outpaced Mr. Market. Insider Monkey’s flagship hedge fund strategy exceeded the S&P 500 index by 6 percentage points per year since its inception in May 2014 through early November 2018. We were able to generate large returns even by identifying short candidates. Our portfolio of short stocks lost 24% since February 2017 (through December 3rd) even though the market was up nearly 23% during the same period. We just shared a list of 11 short targets in our latest quarterly update.

How have hedgies been trading Weibo Corp (NASDAQ:WB)?

At Q3’s end, a total of 23 of the hedge funds tracked by Insider Monkey held long positions in this stock, a change of 15% from the second quarter of 2018. On the other hand, there were a total of 21 hedge funds with a bullish position in WB at the beginning of this year. With hedgies’ sentiment swirling, there exists an “upper tier” of key hedge fund managers who were adding to their holdings considerably (or already accumulated large positions). 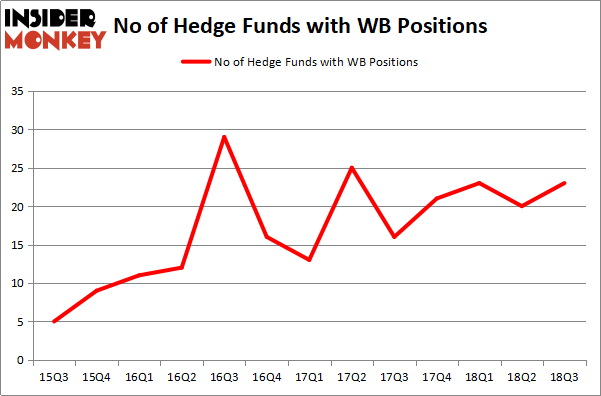 More specifically, Platinum Asset Management was the largest shareholder of Weibo Corp (NASDAQ:WB), with a stake worth $102.6 million reported as of the end of September. Trailing Platinum Asset Management was Citadel Investment Group, which amassed a stake valued at $38.3 million. Oaktree Capital Management, Renaissance Technologies, and Citadel Investment Group were also very fond of the stock, giving the stock large weights in their portfolios.

As one would reasonably expect, specific money managers have been driving this bullishness. Oaktree Capital Management, managed by Howard Marks, initiated the largest position in Weibo Corp (NASDAQ:WB). Oaktree Capital Management had $29.7 million invested in the company at the end of the quarter. Jim Simons’s Renaissance Technologies also made a $28.4 million investment in the stock during the quarter. The other funds with new positions in the stock are Matthew Hulsizer’s PEAK6 Capital Management, Dmitry Balyasny’s Balyasny Asset Management, and Gavin Saitowitz and Cisco J. del Valle’s Springbok Capital.

As you can see these stocks had an average of 12.75 hedge funds with bullish positions and the average amount invested in these stocks was $423 million. That figure was $289 million in WB’s case. Skyworks Solutions Inc (NASDAQ:SWKS) is the most popular stock in this table. On the other hand Nomura Holdings, Inc. (NYSE:NMR) is the least popular one with only 2 bullish hedge fund positions. Weibo Corp (NASDAQ:WB) is not the most popular stock in this group but hedge fund interest is still above average. This is a slightly positive signal but we’d rather spend our time researching stocks that hedge funds are piling on. In this regard SWKS might be a better candidate to consider a long position.

Is Parker-Hannifin Corporation (PH) Going to Burn These Hedge Funds?
Monthly Newsletter Strategy
Download a free copy of our newsletter and see the details inside!
Hedge Fund Resource Center
Related News
33 Recent Stories Telling How The Financial Markets Are Doing Today Is Weibo Corp (ADR) (WB) A Good Stock To Buy? Tiger Pacific’s New Investments in Chinese Stocks, Plus 1 It Sold Off Big Things Are Expected of These Stocks Here’s Why SINA Corp, Microchip Technology, Endo International & Other Stocks Are on the Move Today Why Are These Stocks Surging Today? UPDATE, CORRECTED: Why Are These Stocks Surging on Friday? Five Reasons You Need a Day-Trading Mentor 15 Most Important Medical Discoveries of 2018 The 10 Best Islands to Visit in 2019
Billionaire Hedge Funds