Weatherford International plc (NYSE:WFT) has experienced a decrease in activity from the world’s largest hedge funds lately. On September 30, there were 21 smart money investors with long positions in the company, down from 26 in the previous quarter. Not only that the company has lost five shareholders during the third quarter, but it also didn’t rank well when it comes to the number of those wealthiest hedge fund managers with its holdings, as it didn’t make it as one of the 30 stocks billionaires are crazy about: Insider Monkey billionaires stock index. In spite of this decrease in activity, we are still interested to analyze the stock furthermore. Here is what Poplar Forest said about it in its recent Quarterly Letter:

“Weatherford International (ticker: WFT) is an oilfield services company mired in a lot of investor debate.  While the stock is trading like there is going concern risk, we see a company in the early innings of a promising turnaround at the bottom of a new upcycle. The turnaround is being led by a highly respected new CEO, Mark McCollum, who has a strong track record as the former CFO of Halliburton. Management is targeting $1 billion of recurring savings (current market cap is $3 billion) and cutting leverage metrics in half. While still early yet, management has so far shown operational improvement, has advanced non-core asset sales and has pushed out near-term debt maturities. Despite investors remaining highly skeptical because of its shaky past and high debt load, we believe risk-reward is very much in our favor.”

How have hedgies been trading Weatherford International plc (NYSE:WFT)? 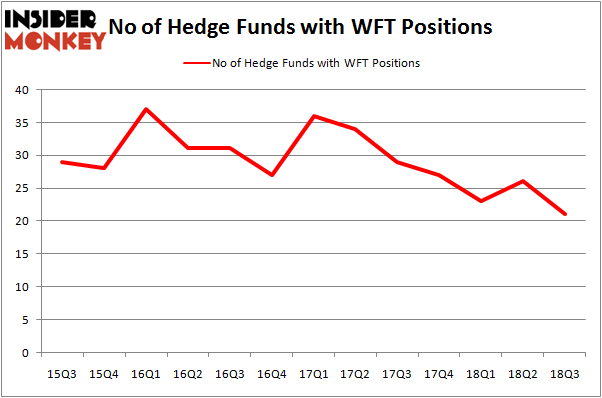 The largest stake in Weatherford International plc (NYSE:WFT) was held by Scopia Capital, which reported holding $84.1 million worth of stock at the end of September. It was followed by Perella Weinberg Partners with a $63 million position. Other investors bullish on the company included Millennium Management, Two Creeks Capital Management, and Nokota Management.

Since Weatherford International plc (NYSE:WFT) has faced declining sentiment from the smart money, it’s easy to see that there were a few funds that slashed their full holdings in the third quarter. It’s worth mentioning that Anand Parekh’s Alyeska Investment Group cut the largest stake of the “upper crust” of funds watched by Insider Monkey, valued at about $27.1 million in call options, and Israel Englander’s Millennium Management was right behind this move, as the fund dumped about $8.2 million worth. These moves are important to note, as aggregate hedge fund interest was cut by 5 funds in the third quarter.

Let’s check out hedge fund activity in other stocks – not necessarily in the same industry as Weatherford International plc (NYSE:WFT) but similarly valued. We will take a look at TreeHouse Foods Inc. (NYSE:THS), Triton International Limited (NYSE:TRTN), AeroVironment, Inc. (NASDAQ:AVAV), and Alliance Resource Partners, L.P. (NASDAQ:ARLP). All of these stocks’ market caps are similar to WFT’s market cap.

As you can see these stocks had an average of 13 hedge funds with bullish positions and the average amount invested in these stocks was $114 million. That figure was $362 million in WFT’s case. TreeHouse Foods Inc. (NYSE:THS) is the most popular stock in this table. On the other hand Alliance Resource Partners, L.P. (NASDAQ:ARLP) is the least popular one with only 9 bullish hedge fund positions. Compared to these stocks Weatherford International plc (NYSE:WFT) is more popular among hedge funds. Considering that hedge funds are fond of this stock in relation to its market cap peers, it may be a good idea to analyze it in detail and potentially include it in your portfolio.